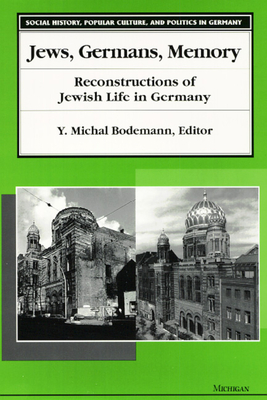 Out of Print
How was it possible that a new and sizeable Jewish community developed after the Holocaust in Germany of all places? Jews, Germans, Memory undertakes to assess the past, present, and future of German-Jewish relations in the light of recent political changes and the opening up of historical resources. This welcome new volume investigates how the groundwork was laid for the new Jewish community in the post-war period, with different objectives by Jewish leaders and German politicians. Its contributors touch upon history, literature, the media, ethnicity, politics, and social movements, and attempt to answer the question of how Jews are sociallyconstructed and how the glorious German Jewish past and the Holocaust have been remembered in the course of recent decades.
In recent years, German Jewry has seen fundamental transformations with the influx from Eastern Europe and a new leadership in the community. A new self-definition, even self-assurance and reappraisal in Israel and elsewhere, has evolved. Historians, scholars of cultural studies, and those interested in debates on memory and ethnicity will all find something of interest in this diverse volume.
Jews, Germans, Memory joins in debate Michael Brenner, Micha Brumlik, Dan Diner, Cilly Kugelmann, and Martin Löw-Beer, among the most prominent younger Jewish intellectuals in Germany today, with others who have long observed Germany from both inside and outside: Y. Michal Bodemann, John Borneman, Andrei Markovits, Robin Ostrow, Moishe Postone, Frank Stern, and Jack Zipes.
Y. Michal Bodemann is Professor of Sociology, University of Toronto.

Y. Michal Bodemann is Professor of Sociology, University of Toronto.

"Jews, Germans, Memory successfully breaks up the monolithic fronts of Germanness and Jewishness and analyzes what Jack Zipes terms the 'operations' through which both have been intertwined historically. The volume's particular strength lies in its combination of perspectives from North America, Israel, and (West) Germany. . . . [A]n excellent introductory text to German-Jewish issues."
—German Studies Review

". . . a welcome addition to the growing library on Jews in Germany since the Shoah. For centuries the presence of Jews in Germany was simply a historical reality. Now it has the character of an oxymoron. To reflect on that change, as this book invites us to do, is to become aware of a set of painful and unresolved issues."
—Patterns of Prejudice