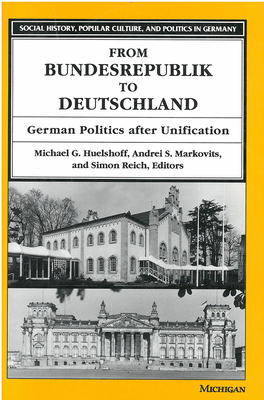 Out of Print
The unification of Germany and the decline of superpower conflict in Europe has heightened interest in the “new” Germany. From Bundesrepublik to Deutschland: German Politics after Unification examines how political scientists have historically treated Germany and explores the issues and approaches needed to accommodate the increased importance of the country within Europe. Structured by issue areas, this volume includes sections on political economy; women in politics; inner-German relations and the reintegration of the western and eastern regions of the country; political behavior; Germany and the European Community; security issues; and the role of Germany in the field of comparative politics. Each chapter examines the development of relevant literature and is followed by an essay that charts new areas for, and approaches to, research.