Wall of Flame: The Heroic Battle to Save Southern California (Hardcover) 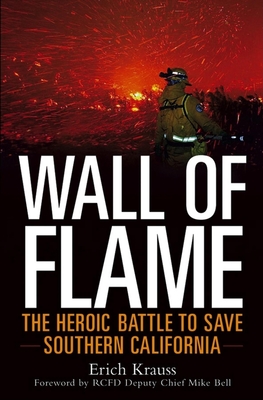 Wall of Flame: The Heroic Battle to Save Southern California (Hardcover)


Available to Order - Usually Arrives in Our Store in 4 to 7 Days
A dramatic look from the front lines at the most devastating fire siege in California history With over seven miles of urban/wildland interface unburned for thirty years and beautiful homes lacing in and out of its picturesque hilly terrain, Rancho Cucamonga was a powder keg--one that finally exploded in October 2003 with a ferocity no one could have expected. Now, Erich Krauss brings you to the ever-shifting front lines of the battle against the catastrophic inferno, the rugged terrain, and the ferocious winds, where municipal and wildland firefighters joined forces to save thousands of homes and lives. Wall of Flame recalls the unprecedented events surrounding the Grand Prix Fire, revealing the moments of apparent indecision, the lack of coordination, and even how local, state, and federal firefighters--each with missions that at times opposed one another--put their differences aside for the greater good in order to save Southern California. With each passing hour, the fire grew larger and their task more immense. Mistakes were made. Plans collapsed. Even the most seasoned firefighters felt the world close in. But they persevered. After all, it was their city, their homes, and their loved ones they were entrusted to protect. Their community was counting on them to save their homes and all the history they had wrapped up in them. This was a battle they could not afford to lose.
ERICH KRAUSS is a freelance journalist who has written for the New York Times and is the author of seven other books, including On the Line: Inside the U.S. Border Patrol and Wave of Destruction: The Stories of Four Families and History's Deadliest Tsunami, which focuses on the December 2004 tsunami that ravaged the coastlines of Southeast Asia. He lives in San Diego.