The Immortal Bobby: Bobby Jones and the Golden Age of Golf (Hardcover) 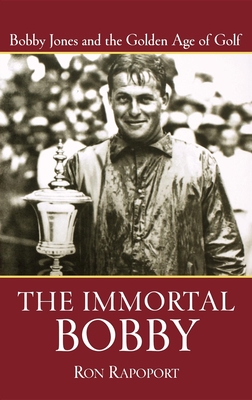 The Immortal Bobby: Bobby Jones and the Golden Age of Golf (Hardcover)


Available to Order - Usually Arrives in Our Store in 4 to 7 Days
Acclaim for The Immortal Bobby ""Just when you think there is nothing new to be said or written on the subject of Bob Jones, Ron Rapoport comes along and proves that theory completely untrue. The Immortal Bobby is wonderfully reported and superbly written.""
--John Feinstein, author of A Good Walk Spoiled and Caddy for Life ""The story of Bobby Jones's singular life is one of the most fascinating in sports history. Ron Rapoport's thoughtful, graceful style is well suited to telling that story.""
--Bob Costas, broadcaster, NBC Sports and HBO Sports ""Beyond the grainy newsreels and the confetti falling on Broadway and Peachtree Street, there was an essential Bobby Jones, and Ron Rapoport reveals him splendidly in a portrait as graceful as the man. There's more here than Grand Slam 1930--the jangling nerves and self-doubt, the towering modesty in response to fame, the complexity of an Atlanta patrician, a life richly lived.""
--Gary M. Pomerantz, author of Where Peachtree Meets Sweet Auburn ""The skills of writing and reporting that fans of Ron Rapoport, like me, have come to expect from him over the years--candor, thoughtfulness, insight, perspective, humor--are once again demonstrated and illuminated in The Immortal Bobby. It is an important book about an important sports figure that, typically for Rapoport, goes beyond the confines of sports and fits firmly in the context of our culture.""
--Ira Berkow, sports columnist and author of Red: A Biography of Red Smith ""Here is Bobby Jones as you've never seen him, almost fearful in the fires of competition, and Ron Rapoport shows us how that man became a legend.""
--Dave Kindred, coauthor (with Tom Callahan) of Around the World in 18 Holes.
RON RAPOPORT is an award-winning sports columnist for the Chicago Sun-Times and sports commentator for National Public Radio's Weekend Edition with Scott Simon. He is the author of See How She Runs: Marion Jones and the Making of a Champion, the coauthor of Betty Garrett and Other Songs: A Life on Stage and Screen, and the editor of A Kind of Grace: A Treasury of Sportswriting by Women.