Twins: And What They Tell Us about Who We Are (Paperback) 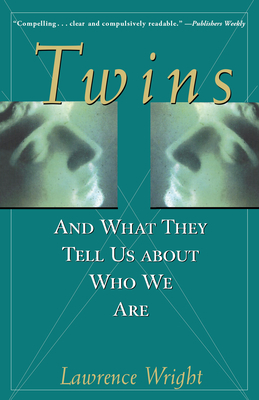 Twins: And What They Tell Us about Who We Are (Paperback)

""This is a book about far more than twins: it is about what twins can tell us about ourselves.""--The New York Times

""With plenty of amazing stories about the similarities and differences of twins, Wright respectfully shows, too, how their special circumstance in life challenges our notions of individuality. A truly fascinating but sometimes spooky (Mengele's experiments with twins at Auschwitz figure among Wright's examples) study.""--American Library Association

""Like so much of Wright's work, this book is a pleasure to read. Because he writes so well, without pushing a particular point of view, he soon has you pondering questions you have tended to comfortably ignore.""--Austin American-Statesman

""Informative and entertaining . . . a provocative subject well considered by a talented journalist.""--Kirkus Reviews.

LAWRENCE WRIGHT, an award-winning staff writer for the New Yorker, is the author of Remembering Satan, Saints and Sinners, and In the New World. He has also written for Rolling Stone, the New York Times Magazine, and Texas Monthly. Mr. Wright lives in Austin, Texas.