Brodeur: Beyond the Crease (Paperback) 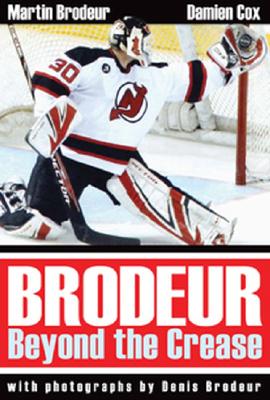 By Martin Brodeur, Damien Cox, Denis Brodeur
$19.95
Special Request - May Not Be Available

Martin Brodeur is a giant in the world of hockey. He is the number-one goalie in the game today, and one of the greatest goaltenders of the modern age. He has been netminder for the New Jersey Devils for 13 years, leading them to three Stanley Cup victories and winning numerous individual awards in the process, including two Vezina trophies. A three-time Olympian for Canada, Brodeur was part of the gold-medal winning team at the 2002 Winter Olympics in Salt Lake City. He was in goal when Team Canada captured the 2004 World Cup and has been a part of every major Canadian team since he broke into the NHL in 1992. He is rated as the fourth most popular and recognizable hockey player of all time (after Wayne Gretzky, Bobby Orr, and Mario Lemieux).

In Brodeur: Beyond the Crease, the game's best netminder takes a candid, personal look at his career, his sport, the business of hockey, the evolution of the sport, and his journey to the apex of the modern game. It is one man's detailed, unique view of the kaleidoscope of intrigue and competitive chaos that defines today's NHL, a rare opportunity to understand the sport through the eyes of one of the game's most insightful athletes at the height of his abilities.

Brodeur: Beyond the Crease traces Brodeur's career, revealing how he became the best, from minor hockey through junior to the NHL and Team Canada. It examines his rich national and personal hockey heritage, and the pivotal role his father and others played in his career, as well as his thoughts and insights on: being part of the effort that turned the New Jersey Devils around from being what Wayne Gretzky called "a Mickey Mouse organization" into one of the game's most powerful and successful franchises; being in the crease in 2002 when Canada ended a 50-year gold medal drought at the Olympics; being a Canadian and a Quebecer playing and living in the US; life as a husband and father of four, his love of motorcycles, and the lifestyle of the modern athlete; pursuing greatness and sporting records; the best goalies he’s ever seen and the best NHL shooters; how he prepares for game day; what it's like to be the wealthiest man ever to play his position, and what it was like to watch $8 million in salary fly out the window during the NHL lockout of 2004-2005.

In association with award-winning sports journalist Damien Cox, the top goalie in the game takes us inside the game and beyond, to reveal the man behind the mask.

Martin Brodeur is one of the most successful and decorated goalies in the National Hockey League and in international hockey, and among the greatest goalies of the modern era. Since exploding on the NHL scene out of the east end of Montreal in 1992, he has led the New Jersey Devils to three Stanley Cup victories (1995, 200, 2003) and captured numerous individual awards in the process, including three Vezina trophies as the NHL's top goaltender. A three-time Olympian for Canada, Brodeur was a key part of the gold-medal-winning team at the 2002 Winter Olympics in Salt Lake City. He was also in goal when team Canada captured the 2004 World Cup. Brodeur lives in New Jersey with his partner Genevieve and four children.Damien Cox is an award-winning sports columnist for the Toronto Star, Canada's largest newspaper. He has covered the NHL and international hockey since 1989 and has worked extensively in radio and television. He is the author of The Spin, a daily sports blog that appears on The Star's web site, Waymoresports.com, and is a frequent contributor to ESPN.com. He appears weekly on TSN's The Reporters and regularly as an analyst on TSN NHL broadcasts. Cox has been named three times to The Hockey News' "100 People of Power and Influence in Hockey." He is co-author of '67: The Maple Leafs, Their Sensational Victory and the End of an Empire.Cox ices in Toronto with his wife Vicki and four children.