Louder Than Words: The New Science of How the Mind Makes Meaning (Hardcover) 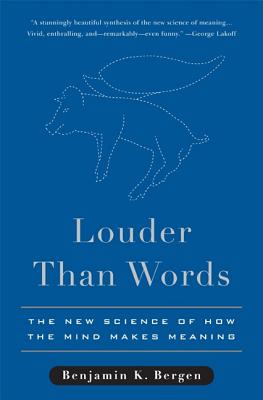 Louder Than Words: The New Science of How the Mind Makes Meaning (Hardcover)


Available to Order - Usually Arrives in Our Store in 4 to 7 Days
Whether it's brusque, convincing, fraught with emotion, or dripping with innuendo, language is fundamentally a tool for conveying meaning -- a uniquely human magic trick in which you vibrate your vocal cords to make your innermost thoughts pop up in someone else's mind. You can use it to talk about all sorts of things -- from your new labradoodle puppy to the expansive gardens at Versailles, from Roger Federer's backhand to things that don't exist at all, like flying pigs. And when you talk, your listener fills in lots of details you didn't mention -- the curliness of the dog's fur or the vast statuary on the grounds of the French palace. What's the trick behind this magic? How does meaning work?In Louder than Words, cognitive scientist Benjamin Bergen draws together a decade’s worth of research in psychology, linguistics, and neuroscience to offer a new theory of how our minds make meaning. When we hear words and sentences, Bergen contends, we engage the parts of our brain that we use for perception and action, repurposing these evolutionarily older networks to create simulations in our minds. These embodied simulations, as they're called, are what makes it possible for us to become better baseball players by merely visualizing a well-executed swing; what allows us to remember which cupboard the diapers are in without looking, and what makes it so hard to talk on a cell phone while we're driving on the highway. Meaning is more than just knowing definitions of words, as others have previously argued. In understanding language, our brains engage in a creative process of constructing rich mental worlds in which we see, hear, feel, and act.Through whimsical examples and ingenious experiments, Bergen leads us on a virtual tour of the new science of embodied cognition. A brilliant account of our human capacity to understand language, Louder than Words will profoundly change how you read, speak, and listen.
Benjamin K. Bergen is a Professor of Cognitive Science at the University of California, San Diego, where he directs the Language and Cognition Laboratory. His writing has appeared in Wired, Scientific American, Psychology Today, Salon, Time, the Los Angeles Times, the Guardian, and the Huffington Post. He lives in San Diego.

Library Journal Xpress Reviews, starred review
“[An] excellent book. Similar to what Steven Pinker's The Language Instinct: How the Mind Creates Language is to linguists, this book is a sine qua non for cognitive scientists, ordinary language philosophers, and the intrepid general reader. Highly recommended”

Kirkus Reviews
“An intriguing look at the brain mechanisms involved in the complexities of human communication.”

John McWhorter, Professor of Linguistics and American Studies, Columbia University, and Contributing Editor, The New Republic
“One may suppose knowing what a sentence means is about matching its words to definitions floating somewhere in our heads. But you know that Elvis is leaving the building and Elvis has left the building mean different things, and yet the difference has nothing to do with ‘definitions.' Ben Bergen shows us that the link between sentences and meanings is ongoing mental simulations—the same kinds that allow us to picture how we are going to build that birdhouse or clean out that garage, except that we actually do them, day and night. For those who think linguists are professional grammar police, this book shows the kind of thing linguists actually study, especially promising ones like Bergen who we will surely hear more from in the future.”

Nature
“[An] impressive debut.... [Bergen] sets out his account with enthusiasm, energy and some delightful touches of humour. If you want an engaging, well-informed tour of how cognitive science approaches the problem of meaning, you stand to learn a great deal from this book.”

The Roanoke Times
“Bergen uses anecdotes to effectively illustrate the many aspects and quirks of human communication.... Bergen has shed light on this subject in a way that bridges the communication gap between academe and the world without compromising his scholarship. Reading this book will be helpful to anyone who has to write letters, deliver speeches, make telephone calls or otherwise deliver concepts to other humans.”

San Francisco/Sacramento Book Review
"[Bergen has] a witty, entertaining and engaging style that forces us to reflect on the dynamics of human thought processes.”

New Scientist
“Bergen writes with a lightness of touch and a jovial wit...captivating.... After reading this book, words will never hold quite the same meaning for you again.”

Choice
“The author's enthusiasm and humor are evident and result in an informative and fun read. Highly recommended.”