The Importance of Being Earnest and Other Plays (Mass Market) 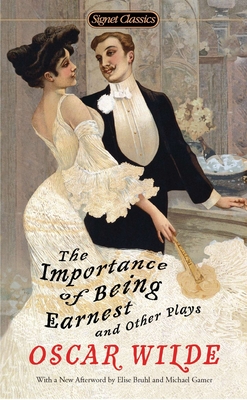 By Oscar Wilde, Sylvan Barnet (Introduction by), Elise Bruhl (Afterword by), Michael Gamer (Afterword by)
$4.95
On Our Shelves Now

If you've never read it, now is the time to dive into this classic play of mistaken identity and fill up on quips like this one:
"JACK: I am sick to death of cleverness. Everybody is clever nowadays. You can’t go anywhere without meeting clever people. The thing has become an absolute public nuisance. I wish to goodness we had a few fools left.
ALGERNON: We have."

A universal favorite, The Importance of Being Earnest displays Oscar Wilde's theatrical genius at its brilliant best. Subtitled "A Trivial Comedy for Serious People", this hilarious attack on Victorian manners and morals turns a pompous world on its head, lets duplicity lead to happiness, and makes riposte the highest form of art. Also included in this special collection are Wilde's first comedy success, Lady Windermere's Fan, and his richly sensual melodrama, Salome.

Oscar Wilde (1854–1900) was an Irish writer, poet, and playwright. His novel, The Picture of Dorian Gray, brought him lasting recognition, and he became one of the most successful playwrights of the late Victorian era with a series of witty social satires, including his masterpiece, The Importance of Being Earnest.