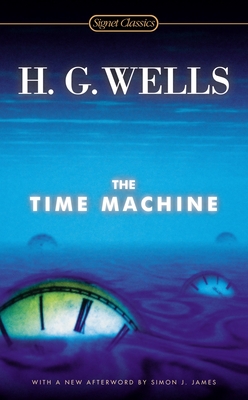 
Available to Order - Usually Arrives in Our Store in 4 to 7 Days
The revolutionary novel that catapulted readers into the future, from the father of science fiction, H.G. Wells.

So begins the Time Traveller’s astonishing firsthand account of his journey eight hundred thousand years beyond his own era—and the story that launched H. G. Wells’s successful career. With a speculative leap that still fires the imagination, Wells sends his brave explorer to face a future burdened with our greatest hopes...and our darkest fears. A pull of the Time Machine’s lever propels him to the age of a slowly dying Earth. There he discovers two bizarre races—the ethereal Eloi and the subterranean Morlocks—who not only symbolize the duality of human nature, but offer a terrifying portrait of tomorrow as well.

Published in 1895, this masterpiece of invention captivated readers on the threshold of a new century. Thanks to Wells’s expert storytelling and provocative insight, The Time Machine will continue to enthrall readers for generations to come.

With an Introduction by Greg Bear
and an Afterword by Simon J. James
Herbert George Wells was born in Bromley, Kent, England, on September 21, 1866. His father was a professional cricketer and sometime shopkeeper, his mother a former lady’s maid. Although “Bertie” left school at fourteen to become a draper’s apprentice (a life he detested), he later won a scholarship to the Normal School of Science in London, where he studied with the famous Thomas Henry Huxley. He began to sell articles and short stories regularly in 1893. In 1895, his immediately successful novel The Time Machine rescued him from a life of penury on a schoolteacher’s salary. His other “scientific romances”—The Island of Dr. Moreau (1896), The Invisible Man (1897), The War of the Worlds (1898), The First Men in the Moon (1901), and The War in the Air (1908)—won him distinction as the father of science fiction. Henry James saw in Wells the most gifted writer of the age, but Wells, having coined the phrase “the war that will end war” to describe World War I, became increasingly disillusioned and focused his attention on educating mankind with his bestselling Outline of History (1920) and his later utopian works. Living until 1946, Wells witnessed a world more terrible than any of his imaginative visions, and he bitterly observed: “Reality has taken a leaf from my book and set itself to supercede me.”

Greg Bear’s novels and stories have appeared in more than twenty languages worldwide and have won numerous prizes, including two Hugos, five Nebulas, and the Prix Apollo. His novels include Darwin’s Radio (winner of the Nebula and Endeavor awards), Darwin’s Children, Vitals, Blood Music, Eon, Queen of Angels, and Moving Mars. He has served as a consultant and a lecturer on space and defense policy, biotechnology and bioterrorism, multimedia entertainment, and Internet issues.

Simon J. James is Professor of Victorian Literature at the Department of English Studies, Durham University. He is the editor of The Wellsian, the peer-reviewed scholarly journal of the H.G. Wells Society. He has edited four H.G. Wells novels for the Penguin Classics, as well as George Gissing’s Charles Dickens: A Critical Study. James is the author of Maps of Utopia: H.G. Wells, Modernity and the End of Culture and Unsettled Accounts: Money and Narrative Form in the Novels of George Gissing.