The Last Outlaws: The Lives and Legends of Butch Cassidy and the Sundance Kid (Hardcover) 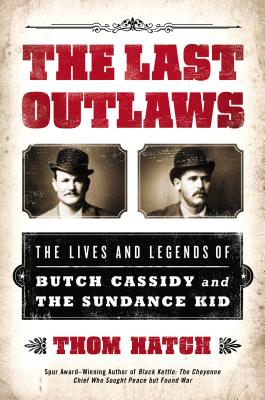 By Thom Hatch
Please email or write store for pricing and availability information.
Out of Print

The Old West was coming to an end.

Two legendary outlaws refused to go with it.

Butch Cassidy and the Sundance Kid as leaders of the Wild Bunch, they planned and executed the most daring bank and train robberies of the day, with a professionalism never before seen by authorities. For several years at the end of the 1890s, the two friends, along with a revolving cast who made up their band of thieves, eluded local law enforcement and bounty hunters, all while stealing from the rich bankers and eastern railroad corporations who exploited western land. The close calls were many, but Butch and Sundance always managed to escape to rob again another day that is, until they rode headlong into the 20th century.

Fenced-in range, telephone lines, electric lights, and new crime-fighting techniques were quickly rendering obsolete the outlaws of the wide open frontier. Knowing their time was up, Butch and Sundance, along with a mysterious beauty named Etta Place, headed to South America, vowing to leave their criminal careers behind. But riding the trails of Chile, Argentina and Bolivia, Butch and Sundance would find that crime wasn t through with them just yet.

In "The Last Outlaws," Thom Hatch brings these memorable characters to life like never before: Butch, the brains of the outfit; Sundance, the man of action; and the men on both sides of the law whom they fought with and against. From their early holdupattempts to that fateful day in Bolivia, author Thom hatchdraws on a wealth of fresh researchtogo beyond the myth and provide a compelling new look at these legends of the Wild West.

Thom Hatch is the author of numerous books on the history of the American West, including "Black Kettle: The Cheyenne Chief Who Sought Peace but Found War," which was awarded the Western Writers of America s Spur Award for Best Biography. A consultant and commentator for the History Channel and PBS, Hatch has published articles in the "Denver Post," the "Rocky Mountain News," "True West" magazine, and "Western Horseman.""

“The Last Outlaws…is eloquent of not only the Old West that we think of when we see a photograph of a butte or a mustang or a Colt revolver but also of the implacable forces of time and change that extinguished it.” —The Wall Street Journal

“The Last Outlaws is extremely well-written and feels more like a novel or work of fiction compared to a factual biography. It's a must read for any fan of the Old West and the outlaw life.” —The Desert News

“In this dual biography of celebrated bandits, a specialist in the Old West deftly separates fact from fiction.” —Kirkus Reviews

“While not the first or likely the last book to chronicle the colorful lives of outlaws Butch Cassidy and the Sundance Kid, Hatch has potentially written the most authoritative. Drawing from an impressive number of sources, Hatch's multidimensional study of two of the Wild West's most famous criminals and their compatriots strives for accuracy without sacrificing entertainment value…. [An] immersive and entertaining study.”—Publishers Weekly

“Mr. Hatch [is] an accomplished historian with a journalist’s eye and a novelist’s touch.” —The Washington Times

“Hatch achieves what most historical writers fail at, engaging their readers while giving a full-untainted history…. Writing about two of history's biggest outlaws is no small order. But Hatch does so beautifully, creating a vivid image of who these men truly were and what motivated them… Hatch is a skilled and veteran historical writer and his expertise shines through in his latest work.” —LatinosPost.com