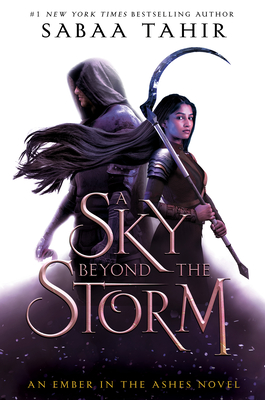 
Available to Order - Usually Arrives in Our Store in 4 to 7 Days
Prepare for the jaw-dropping finale of Sabaa Tahir's beloved New York Times bestselling An Ember in the Ashes fantasy series, and discover: Who will survive the storm?

Picking up just a few months after A Reaper at the Gates left off...

The long-imprisoned jinn are on the attack, wreaking bloody havoc in villages and cities alike. But for the Nightbringer, vengeance on his human foes is just the beginning.

By his side, Commandant Keris Veturia declares herself Empress, and calls for the heads of any and all who defy her rule. At the top of the list? The Blood Shrike and her remaining family.

Laia of Serra, now allied with the Blood Shrike, struggles to recover from the loss of the two people most important to her. Determined to stop the approaching apocalypse, she throws herself into the destruction of the Nightbringer. In the process, she awakens an ancient power that could lead her to victory—or to an unimaginable doom.

And deep in the Waiting Place, the Soul Catcher seeks only to forget the life—and love—he left behind. Yet doing so means ignoring the trail of murder left by the Nightbringer and his jinn. To uphold his oath and protect the human world from the supernatural, the Soul Catcher must look beyond the borders of his own land. He must take on a mission that could save—or destroy—all that he knows.
Sabaa Tahir grew up in California's Mojave Desert at her family's eighteen-room motel. There, she spent her time devouring fantasy novels, listening to thunderous indie rock, and playing guitar and piano badly. She began writing her #1 New York Times bestselling An Ember in the Ashes series while working nights as a newspaper editor. The series has been translated into over thirty-five languages, and the first book in the series was named one of TIME's 100 Best Fantasy Books of All Time and one of Entertainment Weekly's 10 Best YA Books of the decade. Tahir's most recent novel, All My Rage, released in March 2022 to widespread critical acclaim. An instant New York Times bestseller, All My Rage has received eight starred reviews and the 2022 Boston Globe-Horn Book Award for Fiction and Poetry. It is a Read with Jenna Jr. Book Club selection, an Entertainment Weekly Best Book of the Year so Far, and an Amazon Best Book of the Year So Far. Visit Sabaa online at SabaaTahir.com and follow her on Instagram @SabaaTahir and TikTok @SabaaTahirAuthor.

"A Sky Beyond the Storm is a masterclass example of how to wrap up a series." - The Nerd Daily

“Tahir’s exquisite storytelling doesn’t miss a beat… This series is an epic hero’s journey, with love, adventure, and magic woven throughout. Recommended for every young adult collection.” —SLJ