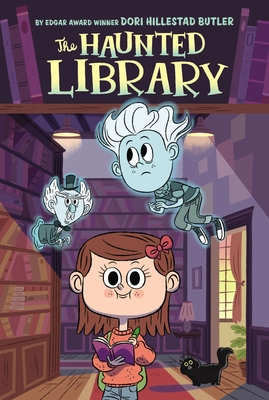 This is book number 1 in the The Haunted Library series.

When ghost boy Kaz’s haunt is torn down and he is separated from his ghost family, he meets a real girl named Claire, who lives above the town library with her parents and her grandmother. Claire has a special ability to see ghosts when other humans cannot and she and Kaz quickly form a friendship. The two join forces to solve the mystery of the ghost that’s haunting the library. Could it be one of Kaz’s lost family members?
Dori Hillestad Butler's books have appeared on children's choice award lists in 18 different states. Trading Places with Tank Talbott won the Maryland Children's Choice Award in 2007. And The Buddy Files: Case of the Lost Boy won the 2011 Edgar Award for Best Juvenile Mystery. Dori has also been a ghostwriter for the Sweet Valley Twins, Unicorn Club, and Boxcar Children series, and a children's book reviewer for several publications. She's published numerous short stories, plays, and educational materials, and has served as the Iowa Society of Children's Book Writers & Illustrators' Regional Advisor. She grew up in southern Minnesota and now lives in Coralville, Iowa, with her husband, son, dog, and cat. She visits schools and leads writing workshops all over the country.