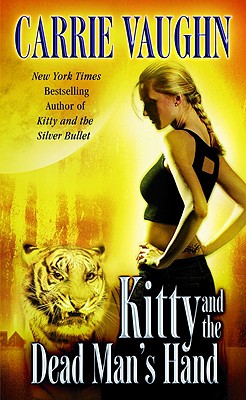 
Email or call for price. Handling fee may apply.
Werewolf Kitty Norville and her mate Ben face-off against werewolf-hating bounty hunters -- on their honeymoon, no less --in this suspenseful follow-up to Kitty and the Silver Bullet.

Already the alpha pair of Denver's werewolf pack, Kitty and Ben are planning to tie the knot human-style by eloping to Vegas. Kitty is looking forward to sipping fru-fru drinks by the pool and doing her popular radio show on live TV -- but her hotel is stocked with werewolf-hating bounty hunters.
Elsewhere on the Strip, an old-school magician might be wielding the real thing; the vampire community is harboring a dark secret; and the irresistible star of a suspicious animal act is determined to seduce Kitty.
Sin City has never been so wild, and this werewolf has never had to fight harder to save not only her wedding, but her very life.
Carrie Vaughn had the nomadic childhood of the typical Air Force brat, with stops in California, Florida, North Dakota, Maryland, and Colorado. She holds a Masters in English Literature and collects hobbies; fencing and sewing are currently high on the list. She lives in Boulder, Colorado. Her website is www.carrievaughn.com.
"Vaughn's universe is convincing and imaginative, providing enough series mythology to satisfy without slowing down the narrative."—Publishers Weekly on Kitty Takes a Holiday

"Vaughn's clever new take on the supernatural is edgy and irreverent . . . will have readers clamoring for the next installment."—Romantic Time BOOKreviews Magazine on Kitty and the Midnight Hour

"Funny, heart-wrenching, and thought-provoking."—VampireGenre.com on Kitty Goes to Washington