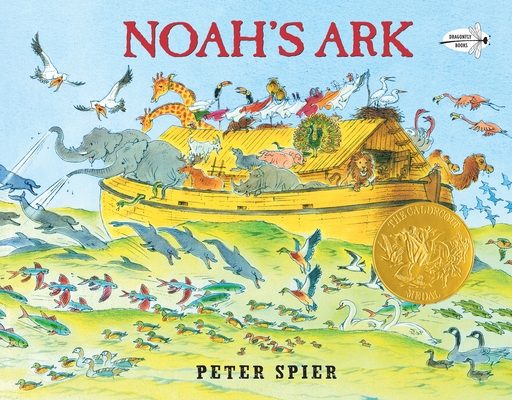 By Peter Spier
$7.99
Warehouse Out of Stock

"the book is a triumph, the definitive Noah's Ark."—Publishers Weekly

Winner of the Caldecott Medal, an ALA Notable Children's Book, and a New York Times Best Illustrated Book of the Year, Peter Spier's Noah's Ark has been the iconic edition of this tale for over 40 years, in print continuously since its debut in 1977.

In Spier's imaginative retelling, readers witness the danger and the grandeur of the terrifying flood but also the lighter moments: Noah's wife jumping on a crate to avoid the rats; Noah shooing all but two bees from a busy hive; and all the animal babies being born in the spring. It's an illustration feat that's both majestic and tender.

PETER SPIER was one of America's most popular and renowned children's illustrators. His books, acclaimed by critics and readers alike, won numerous awards and honors: Noah's Ark won the Caldecott Medal and The Fox Went Out on a Chilly Night is a Caldecott Honor Book. His book People was awarded the Christopher medal, was nominated for an American Book Award, and received the National Mass Media Award from the National Conference of Christians and Jews for "outstanding contributions to better human relations and the cause of brotherhood."

Spier was born and educated in Amsterdam. Before coming to the United States he served in the Royal Dutch Navy. He illustrated more than 100 books and was also an avid and celebrated builder of model ships. Peter Spier died in 2017 at the age of 89.

"The colors are lovely. The scenes are unbelievably detailed. . . . the book is a triumph, the definitive Noah's Ark."—Publishers Weekly