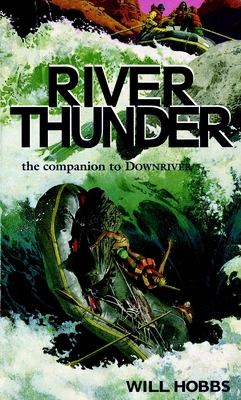 
Email or call for price. Handling fee may apply.
Jessie, Troy, and the rest of the crew from Downriver have returned to the Grand Canyon for adventure down the Colorado River. In the year since they last were together, each has changed; each feels more mature. But how will they interact now that they are facing new challenges--challenges greater than anything they've had to deal with at home?

For Troy, it is a chance to prove he can be a team player, someone worthy of friendship and love. For Jessie, the river is the ultimate test. Does she have what it takes to row down the mighty Colorado? The only way to find out is to get into the raft and set off to face the thundering rapids and the powerful emotions that the river unleashes.
Will Hobbs is the award-winning author of several novels, including the Avon titles Bearstone, Kokopelli's Flute, and Far North, and the American Library Association has recognized four of Will's novels as Best Books for Young Adults. His novel Downriver was chosen as one of the ALA's 100 Best of the Best Books of the past 25 years. Winner of the California Young Reader Medal, Downriver was an American Bookseller Pick of the Lists. Downriver has been nominated for state awards in Texas, Utah, California, Colorado, Nebraska, Maryland, Virginia, and Washington. Hobbs lived in many places during his youth, including Alaska, Texas and California. He and his wife, Jean, now live in the mountains outside of Durango, Colorado. Downriver and River Thunder draw heavily on Hobbs' own experience rafting down the Colorado and also demonstrate his tremendous love of and respect for nature.