Bad as I Wanna Be (Mass Market) 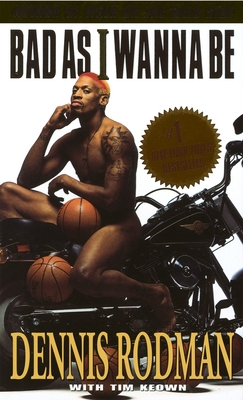 Bad as I Wanna Be (Mass Market)


Available to Order - Usually Arrives in Our Store in 4 to 7 Days
A wild ride inside the glowing head of Dennis Rodman—the NBA's greatest rebounder and America's most outspoken and outrageous athlete.

When Sports Illustrated put the man they call "America's most provocative athlete" on their cover, they sold more copies than any other issue they had sold in a decade (except the swimsuit issue). Why? Because Dennis Rodman has more in common with Mick Jagger than with his teammate Michael Jordan. With his body-covering tattoos and ever-changing fluorescent hair, Rodman's sideline antics and celebrated benchings captivated sports fans as much as his record-breaking on-court performances and earned him a reputation as a rebel with the same penchant for shocking behavior as his on-again off-again squeeze, Madonna.

In Bad as I Wanna Be he shares his surprising and candid opinions on:
• Mortality: “If I die young, everybody’s going to say they saw it coming.”
• His game: “I never want to score. Never. I want to rebound.”
• Having it all: “From the outside I had everything I could want. From the inside I had nothing but an empty soul and a gun in my lap.”
. . . And so much more, including his life, from going to prison for stealing watches to his daughter, the light of his life.

At a time when most celebrities and professional athletes try to control their public personas like politicians and refrain from expressing their true beliefs, Dennis Rodman is a refreshingly unique, uncompromising individual who both transcends his world and refuses to conform to it. Bad as I Wanna Be is as candid, intriguing, and unforgettable as he is.
Dennis Rodman is a seven-time NBA rebounding champion. He earned five NBA championships rings in his 14-year career: 1989 and ’90 with the Detroit Pistons and 1996, ’97, and ’98 with the Chicago Bulls. He has also been named Defensive Player of the Year twice (1990, ’91); All-NBA Third Team twice (1992, ’95); All-Defensive First Team seven times (1989-92, ’93, ’95, ’96); and an NBA All-Star twice (1990, ’92). In 2011, he was inducted into the Naismith Memorial Basketball Hall of Fame. Rodman is the author of two other books: Bad As I Wanna Be (1994), a New York Times bestseller that reached #1; and Walk on the Wild Side (1997).