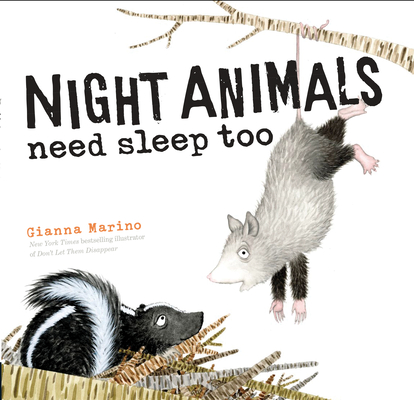 
Available to Order - Usually Arrives in Our Store in 4 to 7 Days
Daytime brings a whole new set of problems and adventures to the crew of Night Animals Need Sleep Too!

It's daytime and night animals are all sleeping soundly. Well, all except for Possum. Skunk tries to be helpful, pointing out a cave, then a tree, then a den. But the more places Possum tries to sleep, the more night animals he wakes up. Will Bear, Wolf, Skunk, and Possum ever find a good day's rest? The stars of Gianna Marino's Night Animals know what makes kids laugh in this hilarious spin on the bedtime book.
Gianna Marino was born in San Francisco and spent her early years galloping horses through Golden Gate Park. She's made a living as an apprentice to a muralist, a jewelry designer, a product designer, and a horse-carriage driver. Addicted to foreign adventure, Gianna has traveled worldwide, including Europe, Asia, Australia, and Central and South America. Between explorations, she lives and works in Northern California and still gallops on horses.