This Is the Rope: A Story from the Great Migration (Paperback) 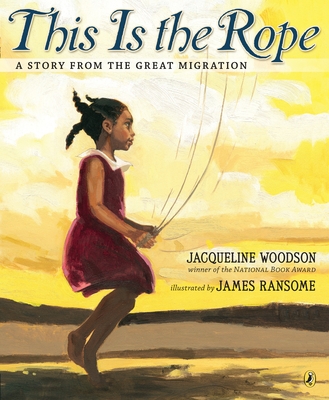 This Is the Rope: A Story from the Great Migration (Paperback)


On Our Shelves Now
Jacqueline Woodson--New York Times Bestselling, National Book Award and Newbery Honor winning author--writes a rich story of a family adapting to change as they hold on to the past and embrace the future. With Coretta Scott King Award–winning illustrator James Ransome.

During the time of the Great Migration, millions of African American families relocated from the South, seeking better opportunities. The story of one family’s journey north during the Great Migration starts with a little girl in South Carolina who finds a rope under a tree one summer. She has no idea the rope will become part of her family’s history. But for three generations, that rope is passed down, used for everything from jump rope games to tying suitcases onto a car for the big move north to New York City, and even for a family reunion where that first little girl is now a grandmother.
Jacqueline Woodson (www.jacquelinewoodson.com) is the recipient of a 2020 MacArthur Fellowship, the 2020 Hans Christian Andersen Award, the 2018 Astrid Lindgren Memorial Award, and the 2018 Children’s Literature Legacy Award. She was the 2018–2019 National Ambassador for Young People’s Literature, and in 2015, she was named the Young People’s Poet Laureate by the Poetry Foundation. She received the 2014 National Book Award for her New York Times bestselling memoir Brown Girl Dreaming, which was also a recipient of the Coretta Scott King Award, a Newbery Honor, the NAACP Image Award, and a Sibert Honor. She wrote the adult books Red at the Bone, a New York Times bestseller, and Another Brooklyn, a 2016 National Book Award finalist. Born in Columbus, Ohio, Jacqueline grew up in Greenville, South Carolina, and Brooklyn, New York, and graduated from college with a B.A. in English. She is the author of dozens of award-winning books for young adults, middle graders, and children; among her many accolades, she is a four-time Newbery Honor winner, a four-time National Book Award finalist, and a three-time Coretta Scott King Award winner. Her books include Coretta Scott King Award winner Before the Ever After; New York Times bestsellers The Day You Begin and Harbor Me; The Other Side, Each Kindness, Caldecott Honor book Coming On Home Soon; Newbery Honor winners Feathers, Show Way, and After Tupac and D Foster; and Miracle's Boys, which received the LA Times Book Prize and the Coretta Scott King Award. Jacqueline is also a recipient of the Margaret A. Edwards Award for lifetime achievement for her contributions to young adult literature and a two-time winner of the Jane Addams Children's Book Award. She lives with her family in Brooklyn, New York.

James Ransome (www.jamesransome.com) has illustrated more than fifty books for children and won the Coretta Scott King Award for The Creation (by James Weldon Johnson). His work has also earned him a Coretta Scott King Honor, IBBY Honour, ALA Notable, NAACP Image Award, Bank Street Best Book of the Year, and Rip Van Winkle Award. He lives in upstate New York with his wife, author Lesa Cline-Ransome, and their family.

Praise for This is the Rope:

* “Woodson’s (Each Kindness) gentle, unpretentious writing and Ransome’s eloquent artwork breathe life into this story of a close-knit African-American family and their pursuit of a better life . . . The chronicle of a homely object in an age of disposables and the sense of place Woodson and Ransome evoke make this an especially strong and vibrant fictive memoir.”--Publishers Weekly, starred review

“Expressive oil paintings illustrate the clean, well-cadenced text in scenes that include well-researched period details . . . There’s no doubt of the warmth and strength of the family ties that bind these individuals together.”—Booklist

“The rope becomes a symbol of family tradition and continuity against a backdrop of historical and social change. Woodson’s understated but eloquent text gives specific details of one family’s experience, while Ransome’s rich oil paintings provide historical context.”—The Horn Book

“A warm family saga of a household united by love, pride and an uncommon heirloom. The repetition of the title in a nursery-rhyme style will resonate with young listeners. Ransome’s vivid, full-bleed, double-page–spread oil paintings create an upbeat, welcoming vista of rural South Carolina and urban Brooklyn . . . A quiet affirmation of a strong and close-knit family that, along with so many other African-Americans, found a better life as part of the Great Migration.”—Kirkus Reviews

“Spare, eloquent . . . A beautifully told family tale about a loving, close-knit African-American family over several decades . . . The language is deliberate and lyrical. . . . Landscapes indicative both of the changing geography and the passing of time . . . remarkable, with light falling on faces at the perfect angle and facial features carrying abundant emotion. Young listeners . . . [will] be drawn to this warm and hope-filled tale.”—The Bulletin of the Center for Children's Books

“A poignant, realistic, generational story. Woodson masterfully weaves a tale of an African American family’s move from the rural south to New York City . . . Ransome’s beautifully rich oil paintings add depth and interest . . . The perfect picture book to include in a study of The Great Migration . . . An excellent tale to include in a study of family histories. It is a picture book to savor as a read-aloud.”—Library Media Connection