Buffalo Trail: A Novel of the American West (A Cash McLendon Novel #2) (Paperback) 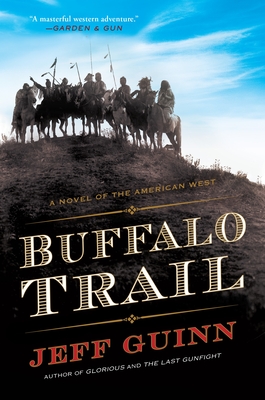 By Jeff Guinn
$16.00
Special Request - May Not Be Available

The New York Times bestselling author of Silver City brings history to life as Cash McLendon takes refuge in Dodge City and falls in with some of the most famous men in the American West...

After barely escaping nemesis Killer Boots in the tiny Arizona Territory town of Glorious, Cash McLendon is in desperate need of a safe haven somewhere on the frontier. Fleeing to Dodge City, he meets an intrepid band of buffalo hunters determined to head south to forbidden Indian Territory in the Texas panhandle. In the company of such colorful Western legends as Bat Masterson and Billy Dixon, Cash helps establish a hunting camp known as Adobe Walls. When a massive migration of buffalo arrives, and newly hopeful that he may yet patch things up with Gabrielle Tirrito back in Arizona, Cash thinks his luck has finally changed.

But no good can come of entering the prohibited lands they’ve crossed into. Little do Cash and his fellows know that their camp is targeted by a new coalition of the finest warriors among the Comanche, Cheyenne, and Kiowa. Led by fierce Comanche war chief Quanah and eerie tribal mystic Isatai, an enormous force of 2,000 is about to descend on the camp and will mark one of the fiercest, bloodiest battles in frontier history. Cash McLendon is in another fight for his life, and this time, running is not an option...

Jeff Guinn is the winner of the 2016 TCU Texas Book Award and the bestselling author of numerous works of fiction and nonfiction, including Silver City, Buffalo Trail, Glorious, Manson, The Last Gunfight, and Go Down Together: The True, Untold Story of Bonnie and Clyde. The former books editor at the Fort Worth Star-Telegram and award-winning investigative journalist, he is a member of the Texas Institute of Letters and the Texas Literary Hall of Fame. Guinn lives in Fort Worth.

“Guinn makes lively characters of historical buffalo hunters, and his imaginative take booms like a Sharps .50 as cultures collide across the Cimarron River...Guinn's research brings to life the daily lives of the Comanche...Few Westerns reach the level of Lonesome Dove, but Guinn's latest is a better, more rambunctious tale than the trilogy's opener.”—Kirkus Reviews

“Full of historical notable figures from the Old West, this second volume in Guinn’s trilogy not only provides a buoyant narrative but also several lessons in Western history. This title is so well constructed that it could stand alone (for readers new to the trilogy). Guinn skillfully ties his carefully constructed prolog outlining the Massacre at Sand Creek (1864) to a lone female warrior he imagines at the Second Battle at Adobe Walls.”—Library Journal

“A grand effort, and Quanah and his bogus medicine man, Isatai, are an entertaining pair.”—Booklist

“[A] rousing story of revenge....Plenty of action for genre western fans but enough meat for a broader cut of historical-fiction readers.”—Booklist

“This is what Guinn does: Instead of filling his books with the mythology of the Old West, much of which has no basis in fact, he goes for authenticity and reveals what life in those times really was like.”—Fort Worth Star-Telegram

“Perfect for fans of John Wayne and Zane Grey...A worthy read for any fan of the Old West. Lively characters, authentic Old West settings, and great storytelling highlight this tale...Silver City is a rousing Western adventure, and one this ol' cowboy fan found very satisfying.”—The Oklahoman

“[Guinn] knows how to dig into the past...an absorbing, informative and entertaining tale of life, love, hope and ambition in the American West.”—Dallas Morning News

“A worthy addition to the western genre....Catnip for Lonesome Dove fans”—The Seattle Times

“Will delight historical fiction fans longing for the return of classic Westerns. This entertaining outing is sure to keep the saloon doors swinging for more entries in the genre.”—Library Journal

“A trip to Glorious, Arizona, in Jeff Guinn’s new western novel is like a cool draft beer after a long, hot day on a dusty trail.”—New York Times bestselling author C. J. Box

“If, like me, you’ve been waiting for the next Louis L’Amour or Zane Grey, the good news is his name is Jeff Guinn.”—Craig Johnson, New York Times bestselling author of the Walt Longmire mysteries, the basis of A&E’s hit series Longmire