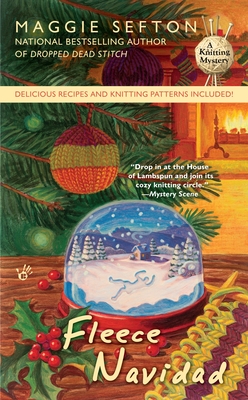 This is book number 6 in the A Knitting Mystery series.

It’s beginning to look a lot like Christmas for the knitters of Fort Connor, Colorado, who are furiously working on their holiday projects. And it’s not a stitch too soon, because some unfortunate resident will be feeling a deadly chill instead of holiday cheer…

This Yuletide, Kelly Flynn and friends are helping the town's librarian, Juliet, teach children how to knit. Juliet has fallen in love—but just as she finds happiness, death finds her, facedown in her Christmas cape. Suspicion falls on a newcomer, a widow with a puzzling past, who—some believe—was sweet on Juliet's boyfriend. But Kelly and her knitting crew aren't convinced. It's up to them to find a killer—before someone else gets fleeced.

“A perfect read…when snuggling down after the turkey dinner has been devoured.” –Mystery Books News

Maggie Sefton is the author of the New York Times bestselling Knitting Mysteries. She was born and raised in northern Virginia, where she received her bachelor’s degree in English literature and journalism. While Sefton has worked as both a CPA and a real estate broker, she feels that neither of those endeavors compare to the challenge of creating worlds on paper. She is the mother of four grown daughters, currently scattered around the globe, and resides in the Rocky Mountains of Colorado with two very demanding dogs.