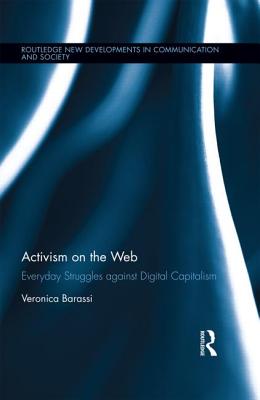 By Veronica Barassi
Please email or write store for pricing and availability information.
Available to Order - Usually Arrives in Our Store in 4 to 7 Days

Activism on the Web examines the everyday tensions that political activists face as they come to terms with the increasingly commercialized nature of web technologies and sheds light on an important, yet under-investigated, dimension of the relationship between contemporary forms of social protest and internet technologies.

Drawing on anthropological and ethnographic research amongst three very different political groups in the UK, Italy and Spain, the book argues that activists' everyday internet uses are largely defined by processes of negotiation with digital capitalism. These processes of negotiation are giving rise to a series of collective experiences, which are defined by the tension between activists' democratic needs on one side and the cultural processes reinforced by digital capitalism on the other. In looking at the encounter between activist cultures and digital capitalism, the book focuses in particular on the tension created by self-centered communication processes and networked-individualism, by corporate surveillance and data-mining, and by fast-capitalism and the temporality of immediacy.

Activism on the Web suggests that if we want to understand how new technologies are affecting political participation and democratic processes, we should not focus on disruption and novelty, but we should instead explore the complex dialectics between digital discourses and digital practices; between the technical and the social; between the political economy of the web and its lived critique.

Veronica Barassi is Lecturer in the Media and Communications Department at Goldsmiths, University of London, UK.