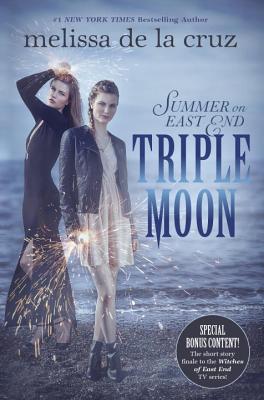 This is book number 1 in the Summer on East End series.

After they cause a terrible accident at their old high school, twin witches Mardi and Molly Overbrook are sent to live with their “Aunt” Ingrid Beauchamp in North Hampton, on Long Island’s mist-shrouded East End. Because the twins cannot control their powers, their father begs Ingrid to tame them over the summer, before the White Council exiles the girls to Limbo.

Trouble continues to bubble and boil when the girls meet the younger Gardiner boys, who are just as handsome and sexy as their older kin. But all is not as it seems. As Ingrid helps the girls learn to control their magical impulses, Mardi and Molly have just this summer to figure out how to grow up, how to love, and how to be a family.
Melissa de la Cruz is the New York Times, USA Today, Wall Street Journal, Los Angeles Times and Publishers Weekly internationally bestselling author of many critically acclaimed novels. Her Blue Bloods series has sold over three million copies and the Witches of East End series became an hour-long television drama on the Lifetime network.

“A magical story featuring two opposite twin witches and their incredible journey through love, betrayal, wickedness, and trust.”—VOYA

“Reads like a cross between Gossip Girl and The Vampire Diaries.”—School Library Journal

“A bubbling cauldron of mystery and romance.”—People

“Witches of East End has all the ingredients you’d expect from one of Melissa’s bestselling YA novels—intrigue, mystery and plenty of romance.”—MTV.com