Written in the Stars (Hardcover) 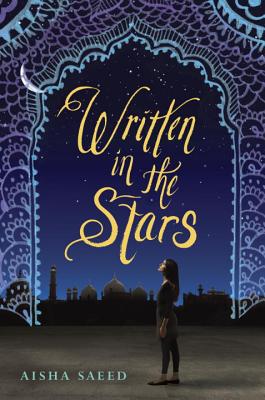 Written in the Stars (Hardcover)


Title unavailable, please email for information.
"A wonderfully complex love story unlike any you’ve read before. Saeed has given a novel that is both entertaining and important.”—Matt de la Peña, New York Times bestselling author

This heart-wrenching novel explores what it is like to be thrust into an unwanted marriage. Has Naila’s fate been written in the stars? Or can she still make her own destiny?

Naila’s conservative immigrant parents have always said the same thing: She may choose what to study, how to wear her hair, and what to be when she grows up—but they will choose her husband. Following their cultural tradition, they will plan an arranged marriage for her. And until then, dating—even friendship with a boy—is forbidden. When Naila breaks their rule by falling in love with Saif, her parents are livid. Convinced she has forgotten who she truly is, they travel to Pakistan to visit relatives and explore their roots. But Naila’s vacation turns into a nightmare when she learns that plans have changed—her parents have found her a husband and they want her to marry him, now! Despite her greatest efforts, Naila is aghast to find herself cut off from everything and everyone she once knew. Her only hope of escape is Saif . . . if he can find her before it’s too late.
Aisha Saeed (aishasaeed.com) is a Pakistani American writer, teacher, and attorney. Her writings have appeared in publications including The Orlando Sentinel, Muslim Girl magazine, and Rivaaj magazine. As one of the founding members of the much talked about We Need Diverse Books Campaign, she is helping to change the conversation about diversity in literature. She is also a contributing author to the highly acclaimed Love, InshAllah: The Secret Love Lives of American Muslim Women, which features the story of her own (happily) arranged marriage. Aisha lives in Atlanta, Georgia, with her husband and sons.

“Readers will be drawn into Naila’s trials and tribulations as she navigates the reality of her new life in Pakistan and explores what inner resources she needs to change her fate. . . . Sheds light on the difficult phenomenon of forced marriage, still prevalent in many cultures around the world and often shrouded in silence.”—Kirkus Reviews

“Movingly conveys the intense cultural pressure that motivates Naila’s parents and the heartbreaking betrayal Naila feels as she is deprived of her rights, cut off from the outside world, and threatened with shame and death. Saeed includes resources for those who, like Saif’s family, wish to help real-life Nailas, in this wrenching but hopeful story.”—Publishers Weekly

“Compelling. . . . This is a cross-cultural eye opener . . . Resonates in its explanations of the rituals, especially how they would look and feel from an American point of view. Yet the setting is pure Pakistani, with culturally rich descriptions of Naila’s extended family, their cuisine, and strongly held beliefs. . . . Evocative.”—School Library Journal

“Saeed’s portrayal of a bicultural young woman is spot on in terms of both Naila’s expectations of eventual autonomy and her confusion over what is happening to her; she can’t imagine that her life is completely out of her own control. . . . An author’s note explains that while her own ‘semiarranged’ marriage was a success, she wrote the book to draw attention to the ‘silent epidemic’ of forced marriage; through Naila’s ordeal, readers will certainly have their eyes opened to how someone can be forced to marry against her will.”—The Bulletin of the Center for Children’s Books

“This suspenseful story about a young woman trapped in a marriage she doesn’t want will make your heart ache. I couldn’t put it down.”—Suzanne Fisher Staples, author of Newbery Honor winner Shabanu

“In this beautiful debut novel, Saeed offers a look inside the heartbreaking realities of a young woman caught between her American upbringing and her parents’ traditional views on love and marriage. This is a page-turner about love, culture, family—and the perilous journey into womanhood worldwide. I couldn’t put it down.”—Meg Medina, author of Pura Belpré Author Award winner Yaqui Delgado Wants to Kick Your Ass

“Written in the Stars is a wonderfully complex love story unlike any you’ve read before. Saeed has given a novel that is both entertaining and important.”—Matt de la Peña, author of Pura Belpré Author Honor winner The Living