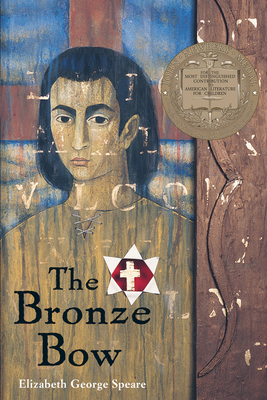 
Available to Order - Usually Arrives in Our Store in 4 to 7 Days
In this Newbery Medal–winning novel, Daniel bar Jamin will stop at nothing to seek revenge for his father's death at the hands of the Roman Empire.

After Daniel bar Jamin's father is crucified by the Roman Empire, Daniel wants nothing more than to rid his land of Israel of Roman control once and for all. Yet when David meets Jesus of Nazareth, a traveling carpenter with a gentle message of love and forgiveness, David starts to realize that the hate festering in his heart might be his true enemy after all.
"I was born in Melrose, Massachusetts, on November 21, 1908. I have lived all my life in New England, and though I love to travel I can't imagine ever calling any other place on earth home. Since I can't remember a time when I didn't intend to write, it is hard to explain why I took so long getting around to it in earnest. But the years seemed to go by very quickly. In 1936 I married Alden Speare and came to Connecticut. Not till both children were in junior high did I find time at last to sit down quietly with a pencil and paper. I turned naturally to the things which had filled my days and thoughts and began to write magazine articles about family living. Then one day I stumbled on a true story from New England history with a character who seemed to me an ideal heroine. Though I had my first historical novel almost by accident it soon proved to be an absorbing hobby." Elizabeth George Speare (1908-1994) won the 1959 Newbery Medal for THE WITCH OF BLACKBIRD POND, and the 1962 Newbery Medal for THE BRONZE BOW. She also received a Newbery Honor Award in 1983, and in 1989 she was presented with the Laura Ingalls Wilder Award for her substantial and enduring contribution to children’s literature.
"A moving, vivid, and well-written picture of the spiritual vs. the material, vengeance vs. love." School Library Journal, Starred