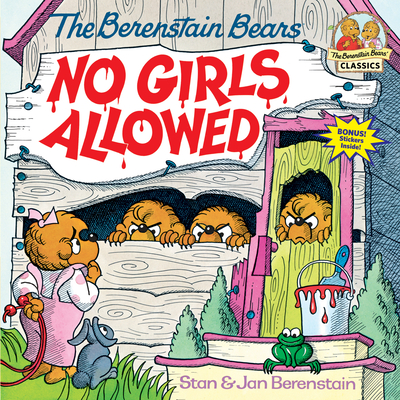 
Available to Order - Usually Arrives in Our Store in 4 to 7 Days
This classic Berenstain Bears story is a perfect way for children to learn all about friendship and the importance of being fair!

Come for a visit in Bear Country with this classic First Time Book® from Stan and Jan Berenstain. Brother and his friends are tired of Sister tagging along with them, so they create their own club where girls are not allowed. Now it’s up to Sister to not only create her own club, but to also find a way for the boys and girls to all hang out together. Includes over 50 bonus stickers!
Stan and Jan Berenstain were already successful cartoonists for magazines and adult humor books when they began writing children's books. The first story starring the bear family, The Big Honey Hunt, appeared in 1962. Since then, more than 360 Berenstain Bears books have been published, and more than 300 million copies have been sold. What began as an idea sparked by their young sons' love of reading has become one of the best-selling children's book series ever.