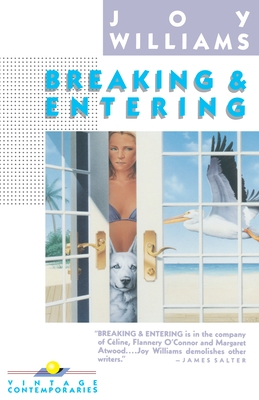 
Email or call for price. Handling fee may apply.
Willie and Liberty are drifters. They break into Florida vacation homes while the owners are away, stay a while, and then move on. They have been lovers since they were teenagers, yet Liberty now senses that Willie is drifting away from her—that their search, so relentless and mysterious, is becoming increasingly dangerous. An exhilarating cast of characters reflects this search, which is not just for home, but for self.
Joy Williams is the author of four novels—the most recent, The Quick and the Dead, was a runner-up for the Pulitzer Prize in 2001—and four collections of stories, as well as Ill Nature, a book of essays that was a finalist for the National Book Critics Circle Award. Among her many honors are the Rea Award for the Short Story and the Strauss Living Award from the American Academy of Arts and Letters. She was elected to the Academy in 2008. She lives in Tucson, Arizona, and Laramie, Wyoming.
“This compassionate and original book is about love and loneliness and courage in the new wilderness of out atomized society. It is also funny, awful and gruesomely Floridian without sacrificing its seriousness. Joy Williams is as fine a writer as you heard she was.”—Thomas McGuane

“An ominous and enthralling novel . . . truly significant fiction, of which there is not very much around. Breaking and Entering reminds me again that life is short; it is also very wide.”—Jim Harrison

“To put it simply, Joy Williams is the most gifted writer of her generation. For her, the human personality is of most interest and most truth when it is under the most extreme pressure. . . . This notion of truth emerges in Joy Williams’s work in a complete Americanness of setting, language, and psychology that I find to be of great beauty and meaning.”—Harold Brodkey