A World Beneath the Sands: The Golden Age of Egyptology (Paperback) 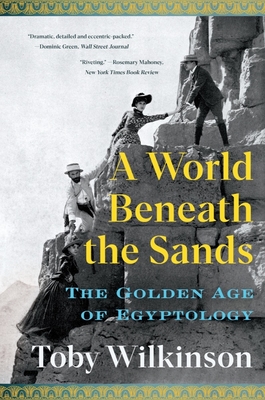 A World Beneath the Sands: The Golden Age of Egyptology (Paperback)

A thrilling history of the West’s scramble for the riches of ancient Egypt by the foremost Egyptologist of our time.

From the decipherment of hieroglyphics in 1822 to the discovery of Tutankhamun’s tomb by Howard Carter and Lord Carnarvon a hundred years later, the uncovering of Egypt’s ancient past took place in an atmosphere of grand adventure and international rivalry.

In A World Beneath the Sands, acclaimed Egyptologist Toby Wilkinson chronicles the ruthless race between the British, French, Germans, and Americans to lay claim to its mysteries and treasures. He tells riveting stories of the men and women whose obsession with Egypt’s ancient civilization helped to enrich and transform our understanding of the Nile Valley and its people, and left a lasting impression on Egypt, too. Travelers and treasure-hunters, ethnographers and archaeologists: whatever their motives, whatever their methods, a century of adventure and scholarship revealed a lost world, buried for centuries beneath the sands.

Toby Wilkinson is the New York Times best-selling author of The Rise and Fall of Ancient Egypt, A World Beneath the Sands, and Tutankhamun’s Trumpet. He is a Fellow of Clare College, University of Cambridge, and lives in England.

Riveting… [Wilkinson] has mastered the facts with painstaking research and allowed them to speak for themselves. Rarely do facts speak this clearly.
— Rosemary Mahoney - New York Times Book Review

A fascinating new history.
— The Economist

Wilkinson marshals a wealth of detail into a cohesive and entertaining narrative. The result is an essential portrait of how the rediscovery of '[Egypt’s] ancient past paved the way for its modern rebirth.'
— Publishers Weekly (starred review)

Few can bring us ancient Egypt with such dynamism as Toby Wilkinson. In A World Beneath the Sands, he has excelled himself in bringing to life the intriguing and swashbuckling story of Egypt’s discovery. He shows us how much what we seek from the past has always told us about ourselves.