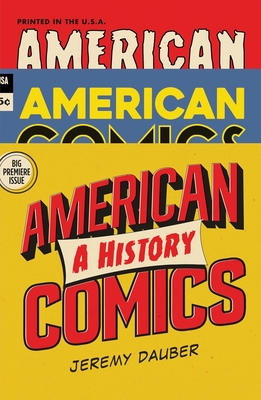 The sweeping story of cartoons, comic strips, and graphic novels and their hold on the American imagination.

Comics have conquered America. From our multiplexes, where Marvel and DC movies reign supreme, to our television screens, where comics-based shows like The Walking Dead have become among the most popular in cable history, to convention halls, best-seller lists, Pulitzer Prize–winning titles, and MacArthur Fellowship recipients, comics shape American culture, in ways high and low, superficial, and deeply profound.

In American Comics, Columbia professor Jeremy Dauber takes readers through their incredible but little-known history, starting with the Civil War and cartoonist Thomas Nast, creator of the lasting and iconic images of Uncle Sam and Santa Claus; the golden age of newspaper comic strips and the first great superhero boom; the moral panic of the Eisenhower era, the Marvel Comics revolution, and the underground comix movement of the 1960s and ’70s; and finally into the twenty-first century, taking in the grim and gritty Dark Knights and Watchmen alongside the brilliant rise of the graphic novel by acclaimed practitioners like Art Spiegelman and Alison Bechdel.

Dauber’s story shows not only how comics have changed over the decades but how American politics and culture have changed them. Throughout, he describes the origins of beloved comics, champions neglected masterpieces, and argues that we can understand how America sees itself through whose stories comics tell. Striking and revelatory, American Comics is a rich chronicle of the last 150 years of American history through the lens of its comic strips, political cartoons, superheroes, graphic novels, and more.

… AND MANY MORE OF YOUR FAVORITES!

Jeremy Dauber is a professor of Jewish literature and American studies at Columbia University. He is the author of Jewish Comedy and The Worlds of Sholem Aleichem, both finalists for the National Jewish Book Award. He lives in New York City.

The first book about comics that covers events I was there for, where I’m not shaking my head at how wrong it is. A really good history of all the different strands of comics that came together over the last hundred and twenty years to become 'American Comics.'
— Neil Gaiman

Until now one could only dream of an engaging, analytic history encompassing the entire medium. That sounds like a job for Superman, but Jeremy Dauber has gotten there first…His perceptive, critical overview is enlivened by a jaunty style that bops from the political cartoons of Thomas Nast in the 1860s to the demise of an equally influential gadfly, Mad magazine, in 2018.
— Michael Saler, Wall Street Journal

Jeremy Dauber…lets his love for the medium shine through….Dauber makes a compelling argument that we can view, through the lens of comics' content, how America sees itself
— Cliff Cumber, Washington Independent Review of Books

[Dauber is] a spry, humorous storyteller….[he] suggests that the story of American comics is ‘right in the middle of its run.’ If so, this is a very readable map of where it has been.
— Teddy Jamieson, The Herald

No detail escapes Dauber…A master storyteller, Dauber shows just how much there is to appreciate in this uniquely American history.
— Marissa Moss, New York Journal of Books

'This book,' writes Dauber…'tries to cover the whole shebang'…If anything, he understates his intent…[T]here’s plenty of delight and revelation for comics fans…Dauber clearly knows and cherishes his subject, and readers who share his passion will find plenty to love.
— Kirkus Reviews

With encyclopedic knowledge, Jeremy Dauber brilliantly excavates the story of this art form—warts and all—from its origins right up to the twenty-first century, and strikes cartoon gold. For anyone curious about a medium that’s influenced and embedded itself in every part of our culture, American Comics is an essential guidebook. If you are already a connoisseur of comics, be prepared to be enlightened anew.