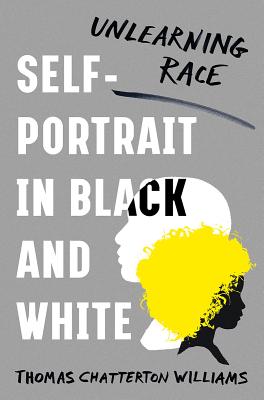 A meditation on race and identity from one of our most provocative cultural critics.

A reckoning with the way we choose to see and define ourselves, Self-Portrait in Black and White is the searching story of one American family’s multigenerational transformation from what is called black to what is assumed to be white. Thomas Chatterton Williams, the son of a “black” father from the segregated South and a “white” mother from the West, spent his whole life believing the dictum that a single drop of “black blood” makes a person black. This was so fundamental to his self-conception that he’d never rigorously reflected on its foundations—but the shock of his experience as the black father of two extremely white-looking children led him to question these long-held convictions.

It is not that he has come to believe that he is no longer black or that his kids are white, Williams notes. It is that these categories cannot adequately capture either of them—or anyone else, for that matter. Beautifully written and bound to upset received opinions on race, Self-Portrait in Black and White is an urgent work for our time.

Thomas Chatterton Williams, author of Losing My Cool and a contributing writer at the New York Times Magazine, is a 2019 New America Fellow and the recipient of a Berlin Prize. He lives in Paris with his wife and children.
[Williams] is so honest and fresh in his observations, so skillful at blending his own story with larger principles, that it is hard not to admire him. At a time of increasing division, his philosophizing evinces an underlying generosity. He reaches both ways across the aisle of racism, arguing above all for reciprocity, and in doing so begins to theorize the temperate peace of which all humanity is sorely in need.
— Andrew Solomon - New York Times Book Review (cover)

An elegant and sharp-eyed writer....In a publishing environment where analyses of race tend to call out white fragilities and catalogue historical injustices, Self-Portrait in Black and White is a counterintuitive, courageous addition.

A fluent, captivating, if often disquieting story....We witness Williams on a journey of both self-discovery and self-creation, and his memoir is most valuable as a way deeper into, as opposed to a way out of, race talk.
— Emily Bernard - Harper's

Thomas Chatterton Williams has the essential things a writer needs—command of language, complexity and depth of thought, and, maybe above all, courage. In Self-Portrait in Black and White he sticks his neck way out in pursuit of unfashionable, necessary truths. This book brings a blast of fresh air that will change your thinking about race in America.

— George Packer, author of Our Man and The Unwinding

A gorgeously written and deeply knowledgeable account of fatherhood, identity, and race. Tender and probing, respectful of intellectual disagreement and of the raw emotions these subjects can stir, it nevertheless proceeds fearlessly and rigorously toward his own original and challenging conclusions. This is a book that will surely provoke, inform, and move readers, regardless of where they stand on the political and philosophical divide.
— Phil Klay, author of Redeployment

An elegantly rendered and trenchantly critical reflection on ‘race’ and identity—one that is perfectly suited to our time. This is a subtle, unsettling, and brave book. Using his own journey through life as point of departure, Thomas Chatterton Williams launches a major assault on the conventional wisdom about racial categorization in America. Not only does he envision a New World; he dares to point the way toward how we all might yet arrive on those uncharted shores.
— Glenn Loury, professor of economics and faculty fellow, Watson Institute, Brown University

A brave and powerful book that I could not put down. At a time when white supremacy is resurgent in many countries, should we fight it by insisting on the equality of the races or the elimination of race as a social and biological category? It is a question that needs to be asked and a debate that needs to be had.
— Anne-Marie Slaughter, CEO, New America

How does anyone confront a history that demands what they believe about themselves is different from what’s required to love their children? The answer, and path to it, is complicated. But here is a son embodying the lessons of a father. Some will walk away from this believing that black, like white, is a social construct that needs to be abandoned—but all will walk way knowing that a father’s love cannot be quantified by anything as whimsical as skin complexion.
— Reginald Dwayne Betts, author of Felon and A Question of Freedom

This small book poses a very large question: how to become a self? Williams uses his own story to remind us that inner freedom depends on escaping the insidious categories of history and the suffocating clichés of the present. It is a stirring call to genuine liberation.
— Mark Lilla, author of The Once and Future Liberal

In fifty years, smart students will be writing senior theses seeking to understand why anyone in the early 21st century found anything in Self-Portrait in Black and White at all controversial. For now, curl up with this book to join a conversation on race about progress rather than piety, thought rather than therapy.