Escalante's Dream: On the Trail of the Spanish Discovery of the Southwest (Paperback) 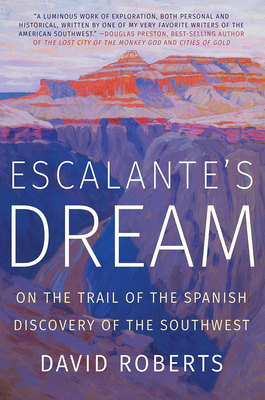 Escalante's Dream: On the Trail of the Spanish Discovery of the Southwest (Paperback)

In July 1776, Franciscan friars Francisco Atanasio Domínguez and Silvestre Vélez de Escalante set out from Santa Fe to blaze a pathway to the new Spanish missions in California, across the huge expanse of what would become the American Southwest. In October, in western Utah, ravaged by hunger and cold, the twelve-man team had to turn back. Stymied by the raging Colorado River, killing their horses for food, the men saw an exploring expedition transformed into a fight for survival. In this chronicle of adventure and history, David Roberts retraces the Spaniards’ forgotten route, using Escalante’s diary as his guide. Blending personal narrative with critical analysis, Roberts relives the glories, catastrophes, and courage of this desperate journey.

David Roberts (1943–2021) is the author of thirty books on mountaineering, exploration, and anthropology. His books have won the Boardman Tasker Award for Mountain Literature and the Grand Prize at the Banff Mountain Book Competition.

A luminous work of exploration, both personal and historical, written by one of my very favorite writers of the American Southwest.
— Douglas Preston, best-selling author of The Lost City of the Monkey God and Cities of Gold

Superbly written, Escalante’s Dream is a multidirectional literary and historical exploration of the unknown American Southwest.

An amiably discursive, often beguiling entry in what has become a venerable literary form: the expedition in pursuit of an expedition. Roberts knows his Southwestern history, and he knows how to craft an artful sentence.
— Philip Connors - New York Times Book Review