Behemoth: A History of the Factory and the Making of the Modern World (Paperback) 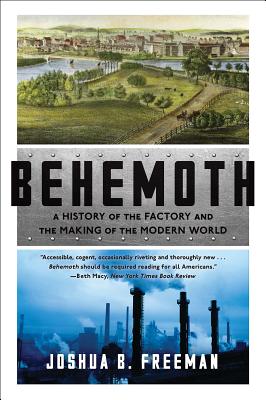 Behemoth: A History of the Factory and the Making of the Modern World (Paperback)

By Joshua B. Freeman

"Freeman’s rich and ambitious Behemoth depicts a world in retreat that still looms large in the national imagination.…More than an economic history, or a chronicle of architectural feats and labor movements." —Jennifer Szalai, New York Times

In an accessible and timely work of scholarship, celebrated historian Joshua B. Freeman tells the story of the factory and examines how it has reflected both our dreams and our nightmares of industrialization and social change. He whisks readers from the early textile mills that powered the Industrial Revolution to the factory towns of New England to today’s behemoths making sneakers, toys, and cellphones in China and Vietnam. Behemoth offers a piercing perspective on how factories have shaped our societies and the challenges we face now.

Joshua B. Freeman is a Distinguished Professor of History at Queens College and the Graduate Center of CUNY. His previous books include American Empire and Working-Class New York, among others. He lives in New York City.

Fascinating.…Freeman shows how factories have had an overwhelming influence on the way we work, think, move, play and fight.
— Scott W. Berg - Washington Post

[A] lively chronicle of the factory.… [Freeman] delves into the nitty-gritty of manufacturing. He successfully melds together those nuggets with social history, on the shop floor and beyond the factory walls.
— Economist

Remarkable.… If you want to know where the world we live in came from, this is a good place to start.
— Eric Foner

You may have no detailed knowledge of factories except that they can be converted into cool lofts. In that case, you’ll learn much from historian Joshua Freeman.
— Jonathan Rose - Wall Street Journal

Freeman has written a superb account.… Almost every page contains a memorable fact or an intriguing thought.
— Ian Jack - Guardian

Freeman uses the history of the factory as a way to re-examine how workers are treated worldwide.
— Bradley Babendir - Pacific Standard