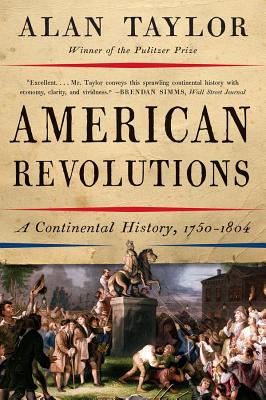 The American Revolution is often portrayed as a high-minded, orderly event whose capstone, the Constitution, provided the nation its democratic framework. Alan Taylor, a two-time Pulitzer Prize winner, gives us a different creation story in this magisterial history. The American Revolution builds like a ground fire overspreading Britain’s colonies, fueled by local conditions and resistant to control. Emerging from the continental rivalries of European empires and their native allies, the revolution pivoted on western expansion as well as seaboard resistance to British taxes. When war erupted, Patriot crowds harassed Loyalists and nonpartisans into compliance with their cause. The war exploded in set battles like Saratoga and Yorktown and spread through continuing frontier violence.

The discord smoldering within the fragile new nation called forth a movement to concentrate power through a Federal Constitution. Assuming the mantle of “We the People,” the advocates of national power ratified the new frame of government. But it was Jefferson’s expansive “empire of liberty” that carried the revolution forward, propelling white settlement and slavery west, preparing the ground for a new conflagration.

Alan Taylor has twice won the Pulitzer Prize in History, most recently for The Internal Enemy, also a National Book Award finalist. He is the Thomas Jefferson Foundation Professor of History at University of Virginia, and lives in Charlottesville.

An epic, landmark history that places the American Revolution on a global stage while never losing sight of the struggles and sufferings of major and minor characters… Taylor’s range is masterful.
— Jill Lepore, author of Book of Ages: The Life and Opinions of Jane Franklin

American Revolutions is a game changer—a sprawling, ambitious history that forever alters our understanding of the Revolutionary War era.

— Elizabeth Fenn, Pulitzer Prize–winning author of Encounters at the Heart of the World: A History of the Mandan People

As masterful as its author and as pluralist as its title, American Revolutions combines strong narrative drive with a kaleidoscopic array of settings and characters. In vivid prose animated by prodigious research, Taylor reveals the fight for the independence of the United States as a bloody civil war in which violence and division were the norms and clarity of purpose the exception. This is a sweeping synthesis for a new century.

— Jane Kamensky, author of A Revolution in Color: The World of John Singleton Copley

The new standard work—essential reading for anyone who wants to understand the complicated beginnings of our national history.
— Peter S. Onuf, coauthor of “Most Blessed of the Patriarchs”: Thomas Jefferson and the Empire of the Imagination