Idiot Brain: What Your Head Is Really Up To (Paperback) 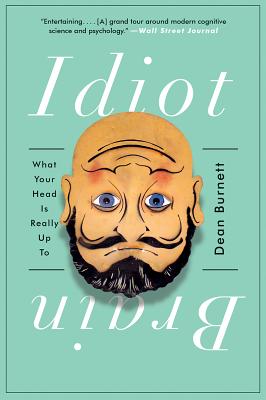 Idiot Brain: What Your Head Is Really Up To (Paperback)

The brain is an absolute marvel—the seat of our consciousness, the pinnacle (so far) of evolutionary progress, and the engine of human experience. But it’s also messy, fallible, and about 50,000 years out of date. We cling to superstitions, remember faces but not names, miss things sitting right in front of us, and lie awake at night while our brains endlessly replay our greatest fears. Idiot Brain is for anyone who has ever wondered why their brain appears to be sabotaging their life—and what on earth it is really up to.

A Library Journal Science Bestseller and a Finalist for the Goodreads Choice Award in Science & Technology.

Dean Burnett is a neuroscientist and research associate at the Centre for Medical Education at Cardiff University. He writes a popular science blog called Brain Yapping for the Cosmic Shambles Network and dabbles in stand-up comedy. He lives in Cardiff, Wales.
Don’t get him wrong: Dean Burnett loves the brain as much as the next neuroscientist. But if he’s being honest, it’s ‘really quite rubbish in a lot of ways,’ he says. In his book, Idiot Brain, Burnett aims to take our most prized organ down a peg or two.

Burnett is a refreshing sort of neuroscientist in that he does not seem to consider the brain with any particular reverence; if anything, he seems mildly impatient about its many ridiculous failings.
— Melissa Dahl - New York Magazine

A wonderful introduction to neuroscience [that] deserves to be widely read.
— Independent

If you’ve ever wanted to sit down with a neuroscientist, have a few drinks, ask a zillion questions, and laugh until you snorted, read this book.
— David McRaney, best-selling author of You Are Not So Smart

Compelling and wise and rational. You know you can trust [Burnett]…A great read.
— Jon Ronson, best-selling author of So You've Been Publicly Shamed

An entertaining romp through the science of our mental processes. Full of fascinating insight into the brain and the origins of our crazy behavior.
— Gaia Vince, author of Adventures in the Anthropocene

A helpful and often hilarious antidote to current brain hype. Accessible and entertaining, this book explains why your ever-helpful brain can rewrite your history, make you overlook a gorilla, or lose an argument you should win.
— Gina Rippon, chair of Cognitive NeuroImaging, Aston University