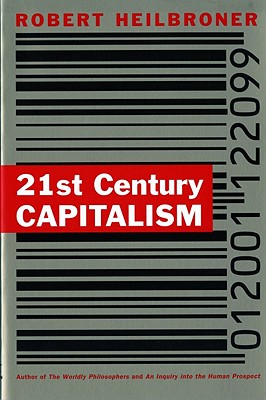 "It is my hope that some grasp of what the twenty-first century holds in store for capitalism may enable us to avoid at least some of the pain we might otherwise have to endure," writes the eminent economist Robert Heilbroner in this important book on the world's economic future.

Although communism lies shattered almost everywhere it once existed, no single form of capitalism has emerged worldwide. Which of the varieties of capitalism will be hardy enough to survive into the next century? Will the private sector make way for government to redress the failures of the market system? Does the defeat of the socialist vision portend that unbridled acquisitiveness will dominate the world?

In tackling these questions, Heilbroner takes us to the roots of capitalist society. He views capitalism from a wide angle as both an economic system and a political order, showing the integral connections between the two that are often overlooked; finally, he addresses the overarching challenge ahead—a society that no longer believes in the inevitability of progress.

Robert L. Heilbroner was Norman Thomas Professor of Economics at the New School for Social Research and author of The Worldly Philosophers and many other books.