The Malaria Capers: Tales of Parasites and People (Paperback) 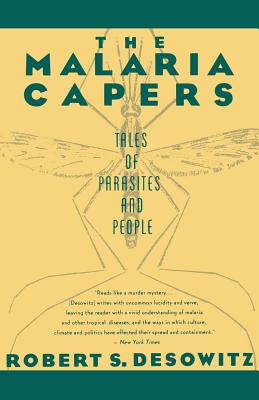 The Malaria Capers: Tales of Parasites and People (Paperback)

"Reads like a murder mystery…[Desowitz] writes with uncommon lucidity and verse, leaving the reader with a vivid understanding of malaria and other tropical diseases, and the ways in which culture, climate and politics have affected their spread and containment." —New York Times

Why, Robert S. Desowitz asks, has biotechnical research on malaria produced so little when it had promised so much? An expert in tropical diseases, Desowtiz searches for answers in this provocative book.

Robert S. Desowitz (1926—2008) was a leading epidemiologist and the author of New Guinea Tape Worms and Jewish Grandmothers and The Malaria Capers, among other books.

Just as it was not necessary to be an astrophysicist to feel the grandeur and scope of Stephen Hawking's A Brief History of Time it is not necessary to be a parasitologist or specialist in tropical medicine to relate to the drama, tragedy, and even romance of Desowitz's fascinating and provocative story…Interesting and important.

A gripping account of how a one-celled protozoan has triumphed over modern science.
— Wall Street Journal

Like a novelist, [Desowitz] draws the reader into the human tragedy of disease…Rich in historical-medical detective stories.
— Betty Ann Kevles - Los Angeles Times

Like such eminent science writers as Stephen Jay Gould and Lewis Thomas, Mr. Desowitz manages to make the basic principles of his subject immediately comprehensible to the general reader. He has also succeeded in giving us a profound appreciation of the ways in which scientific and medical knowledge advances, through hypothesis, error and experiment, through serendipity, dedication, and perseverance.
— Michiko Kakutani - New York Times