The Nature Fix: Why Nature Makes us Happier, Healthier, and More Creative (Hardcover) 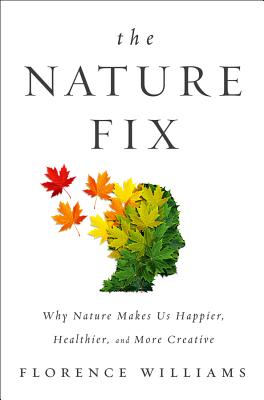 The Nature Fix: Why Nature Makes us Happier, Healthier, and More Creative (Hardcover)

An intrepid investigation into nature’s restorative benefits by a prize-winning author.

For centuries, poets and philosophers extolled the benefits of a walk in the woods: Beethoven drew inspiration from rocks and trees; Wordsworth composed while tromping over the heath; and Nikola Tesla conceived the electric motor while visiting a park. Intrigued by our storied renewal in the natural world, Florence Williams set out to uncover the science behind nature’s positive effects on the brain.

In this informative and entertaining account, Williams investigates cutting-edge research as she travels to fragrant cypress forests in Korea to meet the rangers who administer “forest healing programs,” to the green hills of Scotland and its “ecotherapeutic” approach to caring for the mentally ill, to a river trip in Idaho with Iraqi vets suffering from PTSD, to the West Virginia mountains where she discovers how being outside helps children with ADHD. The Nature Fix demonstrates that our connection to nature is much more important to our cognition than we think and that even small amounts of exposure to the living world can improve our creativity and enhance our mood. In prose that is incisive, witty, and urgent, Williams shows how time in nature is not a luxury but is in fact essential to our humanity. As our modern lives shift dramatically indoors, these ideas—and the answers they yield—are more urgent than ever.

A contributing editor at Outside magazine, Florence Williams is the author of Breasts, winner of the Los Angeles Times Book Prize, and The Nature Fix. Her writing has appeared in the New York Times, National Geographic, and many other outlets. She lives in Washington, DC.

[A] lively
exploration of what modern research has to say about the myriad health benefits
of the great outdoors. . . Ms. Williams resists the tendency of so much nature
writing towards easy epiphanies, adopting a tone that is, instead, pleasingly
puckish. . . [She] puzzles out the pros and cons, concluding, on balance, that
there’s a good case for connecting with nature to extend both the quantity and
quality of life. . .
— Danny Heitman - Wall Street Journal

I’m no tree hugger, but The Nature Fix made me want to run outside and embrace the nearest oak. Not for the tree’s sake but mine. Florence Williams makes a compelling, and elegant, case that nature is not only beautiful but also good for us. If Thoreau were steeped in modern neuroscience and possessed an endearingly self-deprecating sense of humor, the result would be the book you hold in your hands.

The Nature Fix is a beautifully written, thoroughly enjoyable exposition of a major principle of human life now supported by evidence in biology, psychology, and medicine.

[The Nature Fix] has much to offer to anyone interested in human health, from city planners and health practitioners to educators, scientists… and anyone concerned with their own well-being.