The Glass Cage: Automation and Us (Hardcover) 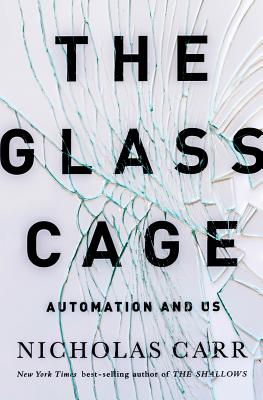 The Glass Cage: Automation and Us (Hardcover)

Keeping up with the increasingly wired world is typically seen as a necessity... at least as an obvious good. However, local (Boulder) author Nicholas Carr (The Shallows: What the Internet Is Doing to Our Brains) begs to differ in his latest book, The Glass Cage: Automation and Us. It's not so much that Carr sees the automation in our lives as a bad or harmful thing so much as he cautions us to pay better attention to the ways in which the slave-like qualities of the machines designed to save time and reduce stress and strain for humans can unwittingly wind up reversing those roles and turning the human into a mere appendage, or servant, of the machines (s)he operates. Cases in point range from the head-mounted "Google Glass" computer to the cockpits of Airbus' more 'technology-centered' vs. Boeing's more 'human-centered' jets, and all the way back to mechanical weaving looms introduced in the 19th century that enraged the machine-breaking Luddites, who'd had it with the devaluing and gradual replacement of skilled human labor with technologies rendering their work redundant. In diverse quadrants of human life, from aviation to trading on Wall Street to designing buildings or trusting computers to ensure doctors' nuanced knowledge of their patients' health histories, Carr makes a reasonable case for questioning the infallibility of computers and acknowledging the uniquely human skills that cannot be entirely replaced by clever technologies. Are expedience or financial profitability -or the mere fact that a new technology becomes possible- reasons enough to go ahead with implementing that technology? How are our technologies that shape our very personalities, our cultures and our economies changing our ability or willingness to connect with the messy non-computerized world? Is the formula, more 'frictionless' technology = happiness and ease, really, actually what is happening?... actually what we want out of our lives? These aren't simple questions to answer for either humans or the 'wisdom of algorithms', but The Glass Cage is a good place to begin if one is hoping to more consciously notice how and when the abstract world of the 'glass cage' is impacting the development or maintenance of our skills... even our very thoughts, in the sensory, physical world our technology ostensibly is helping us to navigate better."~ Lynn

— Lynn has been reading, recommending & selling books to Tattered Cover for decades

At once a celebration of technology and a warning about its misuse, The Glass Cage will change the way you think about the tools you use every day.

In The Glass Cage, best-selling author Nicholas Carr digs behind the headlines about factory robots and self-driving cars, wearable computers and digitized medicine, as he explores the hidden costs of granting software dominion over our work and our leisure. Even as they bring ease to our lives, these programs are stealing something essential from us.


Drawing on psychological and neurological studies that underscore how tightly people’s happiness and satisfaction are tied to performing hard work in the real world, Carr reveals something we already suspect: shifting our attention to computer screens can leave us disengaged and discontented.

From nineteenth-century textile mills to the cockpits of modern jets, from the frozen hunting grounds of Inuit tribes to the sterile landscapes of GPS maps, The Glass Cage explores the impact of automation from a deeply human perspective, examining the personal as well as the economic consequences of our growing dependence on computers.

With a characteristic blend of history and philosophy, poetry and science, Carr takes us on a journey from the work and early theory of Adam Smith and Alfred North Whitehead to the latest research into human attention, memory, and happiness, culminating in a moving meditation on how we can use technology to expand the human experience.

Nicholas Carr is the author of The Shallows, a Pulitzer Prize finalist, The Glass Cage, and Utopia is Creepy. He has written for the New York Times, the Wall Street Journal, Atlantic, and Wired. He lives in Massachusetts with his wife.

Nicholas Carr is among the most lucid, thoughtful, and necessary thinkers alive. He’s also terrific company. The Glass Cage should be required reading for everyone with a phone.

Artificial intelligence has that name for a reason—it isn’t natural, it isn’t human. As Nicholas Carr argues so gracefully and convincingly in this important, insightful book, it is time for people to regain the art of thinking. It is time to invent a world where machines are subservient to the needs and wishes of humanity.
— Don Norman, author of Things that Make Us Smart and Design of Everyday Things, director of the University of California San Diego Design Lab

Written with restrained objectivity, The Glass Cage is nevertheless scary as any sci-fi thriller could be. It forces readers to reflect on what they already suspect, but don't want to admit, about how technology is shaping our lives. Like it or not, we are now responsible for the future of this negligible planet circling Sol; books like this one are needed until we develop an appropriate operating manual.

Engaging, informative …Carr deftly incorporates hard research and historical developments with philosophy and prose to depict how technology is changing the way we live our lives.
— Publishers Weekly

Nick Carr is our most informed, intelligent critic of technology. Since we are going to automate everything, Carr persuades us that we should do it wisely—with mindful automation. Carr's human-centric technological future is one you might actually want to live in.
— Kevin Kelly, Senior Maverick for Wired Magazine and author of What Technology Wants

Most of us, myself included, are too busy tweeting to notice our march into technological dehumanization. Nicholas Carr applies the brakes for us (and our self-driving cars).
— Gary Shteyngart, author of Little Failure

Carr brilliantly and scrupulously explores all the psychological and economic angles of our increasingly problematic reliance on machinery and microchips to manage almost every aspect of our lives. A must-read for software engineers and technology experts in all corners of industry as well as everyone who finds himself or herself increasingly dependent on and addicted to gadgets.
— Booklist, Starred Review

Nick Carr is the rare thinker who understands that technological progress is both essential and worrying. The Glass Cage is a call for technology that complements our human capabilities, rather than replacing them.

— Clay Shirky, author of Here Comes Everybody and Cognitive Surplus

The Glass Cage is a worthy antidote to the relentlessly hopeful futurism of Google, TED Talks and Walt Disney… The same way no popular conversation on cloning can be had without bringing to mind Michael Crichton's techno-jeremiad Jurassic Park, Carr's book is positioned to stake out similar ground: To suggest moral restraint on future development with a well-timed and well-placed ‘what-if?'

An elegantly written history of what role robotics have played in our past, and the possible role that they may play in our future… The Glass Cage urges us to take a moment, to take stock, and to realize the price that we’re paying—if not right this second, then certainly at some point in the future—in order to live a life that’s made easier by technology.

Helps us appreciate why so-called gains of ‘superior results’ can come with a steep price of hard-to-see tradeoffs that are no less potent for being subtle and nuanced.
— Evan Seliger - Forbes Magazine

Smart, insightful… paint[s] a portrait of a world readily handing itself over to intelligent devices.
— Jacob Axelrad - Christian Science Monitor

Forces the reader to think about where we're going, how fast, and what it all means.
— Phil Simon - Huffington Post

One of Carr’s great strengths as a critic is the measured calm of his approach to his material—a rare thing in debates over technology… Carr excels at exploring these gray areas and illuminating for readers the intangible things we are losing by automating our lives.
— Christine Rosen, Democracy