The China Challenge: Shaping the Choices of a Rising Power (Hardcover) 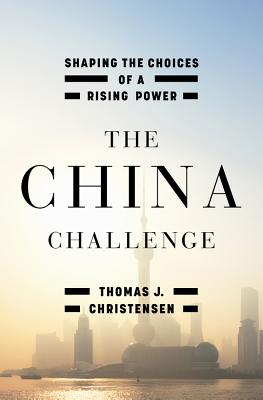 By Thomas J. Christensen
Please email or write store for pricing and availability information.
Special Request - May Not Be Available

This compelling assessment of U.S.-China relations is essential reading for anyone interested in the future of the globalized world.

Many see China as a rival superpower to the United States and imagine the country’s rise to be a threat to U.S. leadership in Asia and beyond. Thomas J. Christensen argues against this zero-sum vision. Instead, he describes a new paradigm in which the real challenge lies in dissuading China from regional aggression while encouraging the country to contribute to the global order. Drawing on decades of scholarship and experience as a senior diplomat, Christensen offers a compelling new assessment of U.S.-China relations that is essential reading for anyone interested in the future of the globalized world.

The China Challenge shows why China is nowhere near powerful enough to be considered a global “peer competitor” of the United States, but it is already strong enough to destabilize East Asia and to influence economic and political affairs worldwide. Despite China’s impressive achievements, the Chinese Communist Party faces enormous challenges. Christensen shows how nationalism and the threat of domestic instability influence the party’s decisions on issues like maritime sovereignty disputes, global financial management, control of the Internet, climate change, and policies toward Taiwan and Hong Kong.

China benefits enormously from the current global order and has no intention of overthrowing it; but that is not enough. China’s active cooperation is essential to global governance. Never before has a developing country like China been asked to contribute so much to ensure international stability. If China obstructs international efforts to confront nuclear proliferation, civil conflicts, financial instability, and climate change, those efforts will falter, but even if China merely declines to support such efforts, the problems will grow vastly more complicated.

Analyzing U.S.-China policy since the end of the Cold War, Christensen articulates a balanced strategic approach that explains why we should aim not to block China’s rise but rather to help shape its choices so as to deter regional aggression and encourage China’s active participation in international initiatives that benefit both nations.

Former Deputy Assistant Secretary of State for East Asian and Pacific Affairs, Thomas J. Christensen is the William P. Boswell Professor of World Politics and director of the China and the World Program at Princeton University. He lives in Princeton, New Jersey.

Christensen…[offers] a model of judicious analysis: Carefully deconstructing the economic, military and diplomatic balances between the United States and China, he reveals the magnitude of the latter’s challenge without inflating it.
— Ali Wyne

Many books are written about China these days. This is a standout. Christensen is a widely respected scholar who served as the Bush administration’s expert on China. He has combined these perspectives to give us a balanced, informative, and highly intelligent guide to dealing with China.
— Fareed Zakaria, author of The Post-American World

Can a rising power and an established power cooperate toward mutually beneficial aims? The China Challenge presents a thoughtful analysis of this question through the lens of recent developments in U.S.-China relations.

Tom Christensen has done us a great service: he has decoded the U.S.-China relationship with the analytical power of a great scholar and the real-world lessons of a policymaker. The China Challenge is lucid, learned, and relentlessly sensible, navigating the great predicament of the 21st century. Christensen is fluent in history but never captive to it. He aims not to prevent China's rise but to shape it with a mix of strength and moderation. Above all, he shows us how to avoid a conflict that he considers possible but, in no way, inevitable. He made a believer out of me.

There is no one I would rather read on China than Tom Christensen. He has the rare ability to transcend the conventional either/or debates about China and to see the country simultaneously as a power with the potential to disrupt global politics in many negative ways and as a country that the United States must engage as a partner in solving global problems. He also has a deep and much needed understanding of how Chinese domestic politics shape Chinese foreign policy. If you read only one book on China, make it The China Challenge.

Christensen addresses a vital challenge—US policy toward China—with an artful blend of scholarship, modern history, and diplomatic experience. He explains skillfully why the United States needs an adroit combination of national strength, international partnerships, and cooperation with China. Christensen's aim: a search for mutual interests, both between the two countries and in support of regional and global systems.
— Robert B. Zoellick, former U.S. Deputy Secretary of State

The rise of China is one of the prime challenges for American foreign policy. Thomas Christensen uses his first rate credentials both as a scholar and a practitioner to give a clear and compelling answer to this challenge.
— Joseph S. Nye, Jr., Harvard University, and former Assistant Secretary of Defense

Tom Christensen has written a book that displays the ideal mix of ''richness, rigor, and relevance.'' Countering naïve neo-conservative and liberal interventionists who seem to think that threats to an adversary's vital interests are all you need to induce compliance, and naïve rationalist liberals who believe economic and institutional engagement will largely contain revisionist preferences, Christensen shows from a careful empirical analysis of Chinese foreign policy how stable coexistence in US-China relations rests on a delicate balance of both deterrence and reassurance. Hopefully future US decision makers will read this book and absorb its message.
— Alastair Iain Johnston, Laine Professor of China in World Affairs, Harvard University

Christensen is one of the world’s leading China experts, an experienced senior policymaker, and a top-notch international relations theorist. The China Challenge is outstanding, a must-read for anybody interested in China, American foreign policy, or global affairs more generally.

Everything you need to know about the sometimes bewildering, always tricky issues generated by the rise of China is here in Tom Christensen's lucid book. China is something new in the world, a rising authoritarian state that is an economic colossus and very nearly a first-rate military power, which is what makes it the most important strategic challenge we''re going to face for the foreseeable future. Christensen doesn't promise that dealing with China will be easy. It won't be. But he is utterly clear-headed, realistic, persuasive, and, perhaps most important, cautiously optimistic, as he resets the terms of the continuing debate.
— Richard Bernstein, author of China 1945

Dr. Christensen gives us a detailed history and critique of recent Sino-US relations, thoughtful evaluations of the views of other scholars and an insider's view of dealing with China on important issues. His balanced judgments on the difficulties and possibilities of Sino-US relations in the future are sobering but eventually hopeful. Anyone seriously interested in one of the most consequential bilateral relationships that will shape the world''s future needs to read this book.
— Dennis Blair, Former Commander in Chief, US Pacific Command and Director of National Intelligence