Wedding of the Waters: The Erie Canal and the Making of a Great Nation (Hardcover) 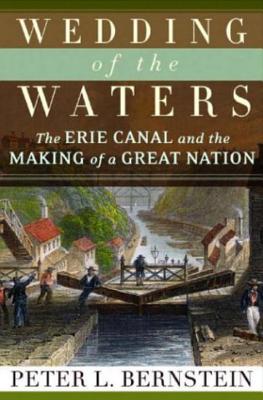 By Peter L. Bernstein
$24.95
Special Request - May Not Be Available

THE BUILDING of the Erie Canal, like the construction of the Brooklyn Bridge and the Panama Canal, is one of the greatest and most riveting stories of American ingenuity. Best-selling author Peter Bernstein presents the story of the canal's construction against the larger tableau of America in the first quarter-century of the 1800s. Examining the social, political, and economic ramifications of this mammoth project. Bernstein demonstrates how the canal's creation helped prevent the dismemberment of the American empire and knit the sinews of the American industrial revolution. Featuring a rich cast of characters, including not only political visionaries like Washington, Jefferson, van Buren, and the architects most powerful champion, Governor DeWitt Clinton, but also, a huge platoon of Irish diggers as well the canal's first travelers, "Wedding of the Waters reveals that the twenty-first century themes of urbanization, economic growth, and globalization can all be traced to the first great macroengineering venture of American history.