Next: The Future Just Happened (Hardcover) 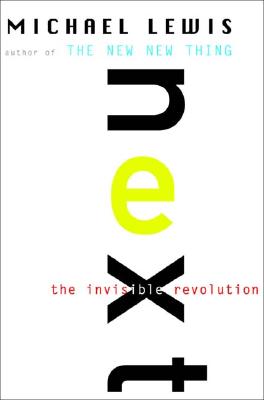 Next: The Future Just Happened (Hardcover)

A mordantly funny exploration of the brave new world spawned by the Internet.

In Liar's Poker the barbarians seized control of the bond markets. In The New New Thing some guys from Silicon Valley redefined the American economy. Now, with his knowing eye and wicked pen, Michael Lewis reveals how much the Internet boom has encouraged great changes in the way we live, work, and think. He finds that we are in the midst of one of the greatest status revolutions in the history of the world, and the Internet turns out to be a weapon in the hands of revolutionaries. Old priesthoods—lawyers, investment gurus, professionals in general—are toppling right and left. In the new order of things, the amateur, or individual, is king: fourteen-year-old children manipulate the stock market and nineteen-year-olds take down the music industry. Deep, unseen forces are undermining all forms of collectivism, from the family to the mass market: one little black box has the power to end television as we know it, and another one—also attached to the television set—may dictate significant changes in our practice of democracy. Where does it all lead? And will we like where we end up?

A brave new world indeed . . . and who better to guide us through it than Michael Lewis, whose subversive, trenchant humor is the perfect match to his subject matter. Here is a book as fresh as tomorrow's headlines, and as entertaining as its predecessors.

Michael Lewis is the best-selling author of Liar’s Poker, Moneyball, The Blind Side, The Big Short, The Undoing Project, and The Fifth Risk. He lives in Berkeley, California, with his wife and three children.