Life as We Have Known It (Paperback) 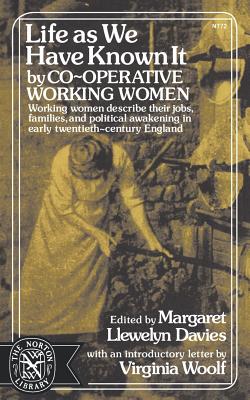 Life as We Have Known It (Paperback)

“You unlocked a drawer and took out a packet of papers. . . . Sometimes, you said, you got a letter which you could not bring yourself to burn; once or twice a Guildswoman had at your suggestion written a few pages about her life . . .” —Virginia Woolf to Margaret Llewelyn Davies, describing the circumstances leading to the publication of Life as We Have Known It

A first-hand record of working class women’s experiences in early twentieth-century England, Life as We Have Known It is a unique view of lives Virginia Woolf described as “still half hidden in profound obscurity.” The women write about growing up in poverty, going into domestic service, being a hat factory worker, or a miner’s wife concerned about the colliery baths, and how they became politically active through the Women’s Co-operative Guild movement. Virginia Woolf’s essay contains her candid and searching reflections on the Guild’s 1913 Congress, the women who spoke there, and the differences between their lives and hers.

Virginia Woolf (1882-1941) was the world-renowned author of Mrs. Dalloway, To the Lighthouse, and The Waves, among other works.