Personality and Politics: Problems of Evidence, Inference, and Conceptualization (Paperback) 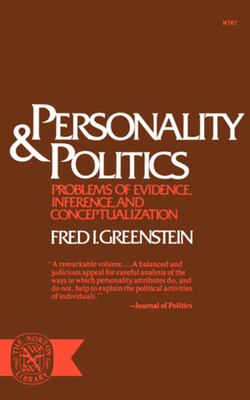 Personality and Politics: Problems of Evidence, Inference, and Conceptualization (Paperback)

By Fred I. Greenstein

“Personality and Politics should become a standard reference for every political scientist interested in this field of inquiry.” —Midwest Journal of Political Science

It is widely recognized that politics often is profoundly shaped by the personalities of the actors in the political process. Yet the scholarly literature on “personality and politics” is one of the most vexed, controversial, and methodologically gnarled bodies of inquiry in the social sciences. The author of this book, an acknowledged authority in the field, attempts to lay out conceptual and methodological standards for carrying out personality-and-politics inquiries—ranging from psychological case studies of single actors, through multi-case analyses of types of political actors, to aggregative analyses of the impact of individuals and types of individuals on political systems and processes. For the Norton Library edition, Professor Greenstein has written an introduction dealing with current issues and examples.