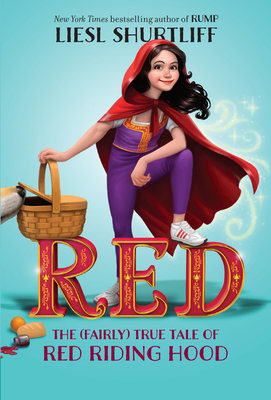 
Warehouse Out of Stock
From the New York Times bestselling author of RUMP, comes a spellbinding fairy tale featuring a brave heroine, a wild wolf, plenty of magical misadventures, and more!

Red is not afraid of the big bad wolf. She’s not afraid of anything . . . except magic. But when Red’s granny falls ill, it seems that only magic can save her, and fearless Red is forced to confront her one weakness.

With the help of a blond, porridge-sampling nuisance called Goldie, Red goes on a quest to cure Granny. Her journey takes her through dwarves’ caverns to a haunted well and a beast’s castle. All the while, Red and Goldie are followed by a wolf and a huntsman—two mortal enemies who seek the girls’ help to defeat each other. And one of them just might have the magical solution Red is looking for. . . .

Liesl Shurtliff weaves a spellbinding tale, shining the spotlight on a beloved character from her award-winning debut, Rump: The True Story of Rumpelstiltskin.


"Moving and filled with hope . . . the charm of Shurtliff's retelling is how she imbues the storybook tropes with vibrant humanity."—Shelf Awareness, starred review

And don't miss Jack: The True Story of Jack and the Beanstalk, "a delightful story of family, perseverance and courage" (Booklist).
Liesl Shurtliff grew up in Salt Lake City, Utah, and has spent many magical days and nights in the woods. For better or worse, she has never come in contact with a wolf. Before she became a writer, Liesl graduated from Brigham Young University with a degree in music, dance, and theater. Her first book, Rump: The True Story of Rumpelstiltskin, was named to over twenty state award lists and won an IRA Children’s Book Award, as well as earning a starred review from Kirkus,proclaiming it “as good as gold.” Her second book, Jack: The True Story of Jack and the Beanstalk, was also a hit with both critics and kids. She lives in Chicago with her family, where she continues to spin fairy tales. Follow her on Twitter at @LieslShurtliff or visit her at LieslShurtliff.com.

"Moving and filled with hope.... Red retells the story of the strong-minded girl in the red riding hood as a quest for friendship and self-knowledge." —Shelf Awareness starred review

"Liesl Shurtliff has truly outmagicked herself. Red is the most wonder-filled fairy tale of them all." —Chris Grabenstein, New York Times Bestselling author of Escape from Mr. Lemoncello's Library

"Liesl Shurtliff’s fairy tales are full of wit and wild imagination, with surprises at every bend in the path." —Caroline Carlson, author of The Very Nearly Honorable League of Pirates

"Red's narration is dry and sassy, her mishaps colorful, her quest eventful . . . and what is most heartening is how Red and Goldie grow and brave it all together. Fairy-tale fun with resonant depth." --Kirkus

"Red takes readers on a wild roam through story land, with plenty of magic and danger around every corner.... This is pure fun for fans of classic stories cleverly retold."--School Library Journal