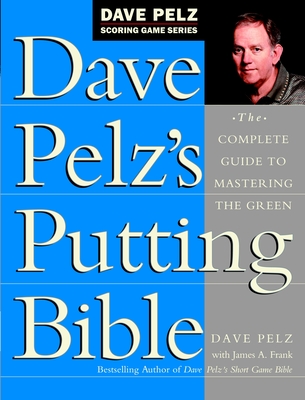 
Available to Order - Usually Arrives in Our Store in 4 to 7 Days
Dave Pelz's Putting Bible is the second book in a four-book series, the Dave Pelz Scoring Game Series.

Over 150,000 readers have purchased Dave Pelz's Short Game Bible after just its first year of release publication, making the book an instant classic.  Now, let Dave help you shape up your game on the greens with his new Putting Bible, which is sure to make all other putting manuals obsolete.

Dave Pelz looks at putting, golf's least-understood skill, as no one has ever approached it before.  Because a putt is the terminal shot on every hole and there is no possibility of recovery from short misses, putts count almost a disproportionate amount.  Every golfer knows a 2-foot putt counts the same as a 300-yard drive--one stroke.  And while the putting stroke is only one of several types of swings golfers make, it accounts for nearly half of all the swings made--43 percent--and perhaps as much as 80 percent of all the anguish and frustration involved in the game.  These are some of the reasons every golfer needs Dave's insights into the putting game and the simplicity he brings to improving their ability to putt.

Putting is also different in another way:  It is one of the few skills in all of sport in which any player, regardless of size, strength, speed, gender, or education, can compete equally with--and have a realistic chance to surpass the skills of--the best professionals in the world.

As Dave explains, putting is actually simple to understand and do. Once golfers grasp his concepts, they can perform on the greens as never before.

Using decades of scientific research from studying thousands of golfers, Dave shows readers the simplicity of putting that escapes most golfers and lays out the fifteen well-defined building blocks of the putting game that each of us already has and owns. This comprehensive guide from the internationally revered master of the short game and putting game--packed with charts, photos, and easy-to-understand instruction--will be the essential volume for all golfers who want to take strokes off their score with better putting.

A former NASA physicist and founder of the World Putting Championship, Dave brings a scientific rigor to his instruction that has made him the top putting expert in the world.  Observing and teaching thousands of golfers to better their scores, Dave's body of knowledge in putting is unequaled.  By uncovering the mysteries of this part of the game, Dave Pelz's Putting Bible raises putting instruction to a new level.

Dave is also the host of his own show on The Golf Channel, the highly popular Dave Pelz Short Game Show. He lives in Austin, Texas.  James A. Frank is the editor of GOLF Magazine. He lives in New Jersey.
"Do I believe in Dave Pelz?  I paid full price to go to his school, and it was the best money I've ever spent.  I could not have won my second U.S. Open without his help. I am a believer."
--Lee Janzen

"In one day's work with Pelz, I learned more about putting than I had known my entire life."
--Curtis Strange

"You cannot do more for your putting than to follow Dave Pelz."
--D.  A. Weibring

"Dave Pelz is the best.  It's pure and simple.  If you want to play your best, you work with the best...  that's Pelz."
--Steve Elkington