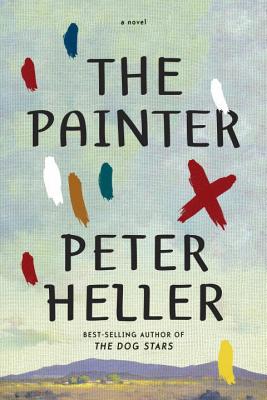 By Peter Heller
Please email or write store for pricing and availability information.
Hard to Find

Jim Stegner is a painter and, in his own words “pretty good, somewhat famous." He's moved to Paonia, Colorado, for
the quiet—to paint, flyfish, find some peace, and perhaps draw
occasional respite from his grief over the violent death of his
daughter. Stegner is also possessed of a hair-trigger temper and
impulse-control issues. When he encounters an outfitter mercilessly
beating a horse, he becomes enraged and events unfold that make any
prayer he may have had for achieving peace very unlikely. Loosely basing
THE PAINTER on a real character, Peter Heller has crafted a novel that
not only examines the emotional interior of a gifted but troubled man,
it also lets us inside an artist's inner circle. Dealer, muse, patrons,
rivals, critics, friends and lovers surround the painter as he maintains
his tenuous hold on freedom and sobriety. This is an amazing novel made
even more so by Heller's exquisite and vivid rendering of the landscape
of Colorado and New Mexico." ~Cathy Langer, Lead Buyer for Tattered Cover

The term chiaroscuro, as is used in painting is the skillful juxtaposition of darkness and light to create a dramatic effect. Heller uses the concept here, appropriately, to limn the swing between violence, cruelty, hatred, fear and revenge and the almost divine inspiration manifested in paint on canvas and human love, both sexual and spiritual. It is an audacious palette wielded with skill to elicit powerful images in the mind of the reader. I think 'powerful' is perhaps the most frequently occurring word that came to my mind as I read this fine work from a clearly masterful writer. Jim Stegner, the protagonist, is a physically powerful man, son of a logger, surfer, misfit and painter in oils. He is capable of nearly mindless violence as much as he is of near trance-like production on canvas. His emotional redemption arises from fly fishing where he is similarly likely to enter a meditative state. The losses in his life, the mistakes he has made and still makes, the turmoil within himself occasioned by seemingly random stimuli all wash away in the soothing flow of water and the hiss of the fly line, and smoothing the way for his soul’s ease is a monumental task." ~Eric

Peter Heller, the celebrated author of the breakout best seller The Dog Stars, returns with an achingly beautiful, wildly suspenseful second novel about an artist trying to outrun his past.
Jim Stegner has seen his share of violence and loss. Years ago he shot a man in a bar. His marriage disintegrated. He grieved the one thing he loved. In the wake of tragedy, Jim, a well-known expressionist painter, abandoned the art scene of Santa Fe to start fresh in the valleys of rural Colorado. Now he spends his days painting and fly-fishing, trying to find a way to live with the dark impulses that sometimes overtake him. He works with a lovely model. His paintings fetch excellent prices. But one afternoon, on a dirt road, Jim comes across a man beating a small horse, and a brutal encounter rips his quiet life wide open. Fleeing Colorado, chased by men set on retribution, Jim returns to New Mexico, tormented by his own relentless conscience.
A stunning, savage novel of art and violence, love and grief, The Painter is the story of a man who longs to transcend the shadows in his heart, a man intent on using the losses he has suffered to create a meaningful life.

Peter Heller is the best-selling author of The Dog Stars. He holds an MFA from the Iowa Writers Workshop in both fiction and poetry. An award-winning adventure writer and a longtime contributor to NPR, Heller is a contributing editor at Outside magazine, Men s Journal, and National Geographic Adventure, and a regular contributor to Bloomberg Businessweek. He is also the author of several nonfiction books, including Kook, The Whale Warriors, and Hell or High Water: Surviving Tibet s Tsangpo River. He lives in Denver, Colorado."

Praise for The Painter:

"Jim Stegner, celebrated painter, ardent fisherman and homespun philosopher, narrates this masterful novel, in which love (parental and romantic), artistic vision, guilt, grief, and spine-chilling danger propel a suspenseful plot. . . Heller is equally skillful at describing the creation of a painting as he is at describing the thrilling details of a gunfight. Here, he explores the mysteries of the human heart and creates an indelible portrait of a man searching for peace, while seeking to maintain his humanity in the face of violence and injustice." —Publishers Weekly (starred)

"Heller’s writing is sure-footed and rip-roaring, star-bright and laced with ‘dark yearning,’ coalescing in an ever-escalating, ravishing, grandly engrossing and satisfying tale of righteousness and revenge, artistic fervor and moral ambiguity." —Booklist (starred)

Praise for The Dog Stars:

“Extraordinary. . . . One of those books that makes you happy for literature.” —Junot Díaz, The Wall Street Journal

“This end-of-the-world novel [is] more like a rapturous beginning. . . . Remarkable.” —San Francisco Chronicle

“For all those who thought Cormac McCarthy’s The Road the last word on the post-apocalyptic world—think again. . . . Make time and space for this savage, tender, brilliant book.” —Glen Duncan, author of The Last Werewolf

“Heart-wrenching and richly written. . . . The Dog Stars is a love story, but not just in the typical sense. It’s an ode to friendship between two men, a story of the strong bond between a human and a dog, and a reminder of what is worth living for.” —Minneapolis Star-Tribune

“A brilliant success.” —The New Yorker