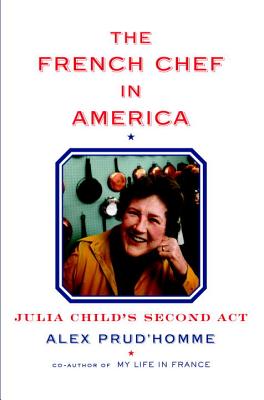 Julia Child is synonymous with French cooking, but her legacy runs much deeper. Now, her great-nephew and My Life in France coauthor vividly recounts the myriad ways in which she profoundly shaped how we eat today. He shows us Child in the aftermath of the publication of Mastering the Art of French Cooking, suddenly finding herself America's first lady of French food and under considerable pressure to embrace her new mantle. We see her dealing with difficult colleagues and the challenges of fame, ultimately using her newfound celebrity to create what would become a totally new type of food television. Every bit as entertaining, inspiring, and delectable as My Life in France, The French Chef in America uncovers Julia Child beyond her "French chef" persona and reveals her second act to have been as groundbreaking and adventurous as her first.

ALEX PRUD'HOMME is Julia Child's great-nephew and the coauthor of her autobiography, My Life in France, which was adapted into the movie Julie & Julia. He is also the author of The Ripple Effect: The Fate of Freshwater in the Twenty-First Century, Hydrofracking: What Everyone Needs to Know, and The Cell Game, and he is the coauthor (with Michael Cherkasky) of Forewarned: Why the Government Is Failing to Protect Us--and What We Must Do to Protect Ourselves. Prud'homme's journalism has appeared in The New York Times, The New Yorker, Vanity Fair, Time, and People.

"It’s impossible not to love Julia Child. Alex Prud’homme’s inspiring and engaging The French Chef in America celebrates the woman—who also happens to be the author’s great-aunt." —Anita Lo, The Wall Street Journal

"A warm, nuanced celebration of ‘Our Lady of the Ladle’ . . . . [Prud’homme] delights with behind-the-scenes details of Child’s later like in the U.S. after years in France. Through extensive conversations with many who worked with Child and those she’s inspired, including Emeril Lagasse and Sara Moulton, Prud’homme explores [Child’s life]. . . . With Prud’hommes’s gentle hand, readers see the truth of Child behind her playful persona." —Publishers Weekly

"Child’s voice comes through clearly in this affectionate account of the second half of her long career." —The Richmond Times-Dispatch

"Prud’homme deftly chronicles the years after Julia Child left France and settled in Cambridge, Massachusetts. . . . As Child’s grandnephew, Prud’homme is able to provide an intimate portrait of Child’s life by sharing photographs, excerpts of key letters and daily journals, and personal memories. He dishes up the story of Child’s life from the strain of the medical issues she and her husband experienced to the pressures and excitement of becoming a trendsetter in televised cooking shows and a household name—in a manner as engaging as Julia Child herself and as delicious as one of her recipes." —Booklist

"Julia Child’s great-nephew, journalist Alex Prud’homme, treats Child’s ‘second act’ like a carefully crafted menu. He pays exquisite attention to the details without ever losing sight of the overall experience. The effervescent Child is alive and well in these pages, which include scenes from her hit TV show, The French Chef, as well as an intimate look at her boundless relationship with her husband, Paul. . . . The depth of Prud’homme’s research is evident in the particulars." —BookPage

"The French Chef in America shows us a newly famous Child, who at times struggles with her celebrity but manages nonetheless to define a new kind of food television and secure her own enduring legacy." —Smithsonian magazine (one of the Best Books About Food of 2016)

"Another opportunity to lap up the timeless kitchen wisdom of one of the world’s greatest cooking teachers. . . . Whereas the writing of Mastering Volume II gets scant coverage in Child’s memoir, Alex Prud’hommne picks up the narrative in The French Chef in America and gives the full backstory." —New York Journal of Books

"An affectionate but journalistically scrupulous backstage account of Child's influential second act. . . . Along with a dollop of culinary arcana, Prud'homme folds some surprises into his soufflé, showing a woman of sometimes contradictory culinary convictions: Child the passionate defender of French tradition who was a relentless agent of change in America and Child the (initial) adversary of nouvelle cuisine who eventually found classical French gastronomy too limiting. We also meet Child the driven, tireless worker, a pragmatist who put herself into the reader's or viewer's shoes; the committed teacher and steadfast friend; the kitchenware junkie; the incorruptible opponent of product plugs; the staunch defender of science who credulously championed flawed food studies; and the nonconformist with a traditionalist streak." —Kirkus Reviews