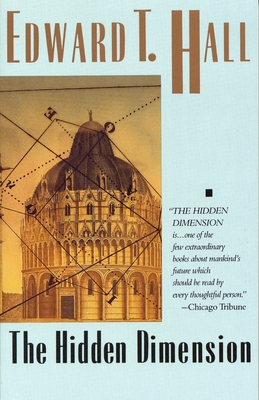 
Available to Order - Usually Arrives in Our Store in 4 to 7 Days
People like to keep certain distances between themselves and other people or thigns. And this invisible bubble of space that constitutes each person's "territory" is one of the key dimensions of modern society. Edward T. Hall, author of The Silent Language, introduced the science of proxemics to demonstrate how man's use of space can affect personal and business reltions, cross-cultural interactions, architecture, city planning, and urban renewal.

"One of the few extraordinary books about mankind's future which should be read by every thoughtful person." —Chicago Tribune

"This is a book of impressive genius, replete with unusually sharp observations." —Richard J. Neutra, Landscape Architecture
Edward T. Hall was a widely traveled anthropologist whose fieldwork took him all over the world—from the Pueblo cultures of the American Southwest to Europe and the Middle East. As director of the State Department’s Point Four Training Program in the 1950s, Dr. Hall’s mission was to teach foreign-bound technicians and administrators how to communicate effectively across cultural boundaries. He was a consultant to architects on human factors in design and to business and government agencies in the field of intercultural relations, and had taught at the University of Denver, Bennington College, the Washington School of Psychiatry, the Harvard Business School, the Illinois Institute of Technology, and Northwestern University.
Dr. Hall was born in Webster Groves, Missouri. He received an A.B. degree from the University of Denver, and M.A. from the University of Arizona, and a Ph.D. in anthropology from Columbia University. He lived in Santa Fe, New Mexico, until his death in 2009.