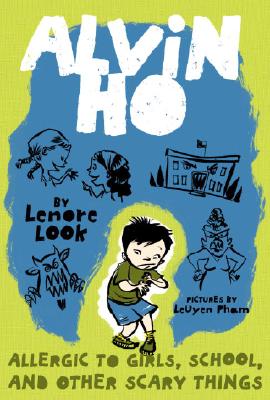 ALVIN HO IS an Asian American second grader who is afraid of everything—elevators, tunnels, girls, and, most of all, school. He’s so afraid of school that, while he’s there, he never, ever, says a word. But at home he’s a very loud superhero named Firecracker Man, a brother to Calvin and Anibelly, and a gentleman-in-training, so he can be just like his dad.

From the author of the ALA Notable Ruby Lu series comes a funny and touching chapter book—perfect for both beginning and reluctant readers— that introduces a truly unforgettable character.

Lenore Look is the author of the Ruby Lu chapter books, "Ruby Lu, Brave and True" and "Ruby Lu, Empress of Everything." Both received starred reviews in "School Library Journal "and were named ALA-ALSC Notable Children's Books. She is also the author of several acclaimed picture books and lives in Randolph, New Jersey.

LeUyen Pham is the acclaimed author and illustrator of "Big Sister, Little Sister "and the illustrator of many titles, including "Freckleface Strawberry "by Julianne Moore. She lives in San Francisco, California. "From the Hardcover edition."