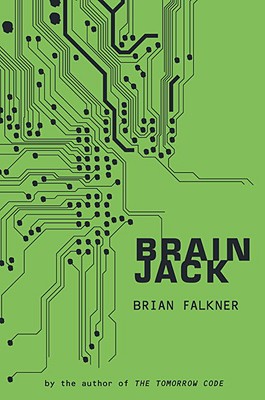 By Brian Falkner
Please email or write store for pricing and availability information.
Hard to Find

Another terrifying sci-fi page-turner from the author of The Tomorrow Code!

Las Vegas is gone—destroyed in a terrorist attack. Black Hawk helicopters patrol the skies over New York City. And immersive online gaming is the most dangerous street drug around. In this dystopic near-future, technology has leapt forward once again, and neuro-headsets have replaced computer keyboards. Just slip on a headset, and it’s the Internet at the speed of thought.

For teen hacker Sam Wilson, a headset is a must. But as he becomes familiar with the new technology, he has a terrifying realization. If anything on his computer is vulnerable to a hack, what happens when his mind is linked to the system? Could consciousness itself be hijacked? Before he realizes what’s happened, Sam’s incursion against the world’s largest telecommunications company leads him to the heart of the nation’s cyberdefense network and brings him face to face with a terrifying and unforeseen threat.

Brian Falkner, author of The Tomorrow Code, has created an action-packed and thought-provoking science fiction adventure in which a brilliant young computer hacker fights to prevent the human race from being deleted.

Since his childhood, Brian Falkner has been surrounded by computers. His older brother built one out of spare parts, and Brian was programming it at a time when nobody could imagine the PC revolution that was to come. As computers developed, so did Brian's love affair with them. His first major in college was computer science.

Brian has been fascinated by the gradual emergence of the cyberworld alongside the real one. When he read the first articles about neurotechnology, he was hooked, seeing this as the start of the convergence of those two worlds.

In the real world, Brian lives in the beautiful country of New Zealand, in the South Pacific. In the cyberworld, you can find him at www.brianfalkner.com.