A Coach's Life: My 40 Years in College Basketball (Paperback) 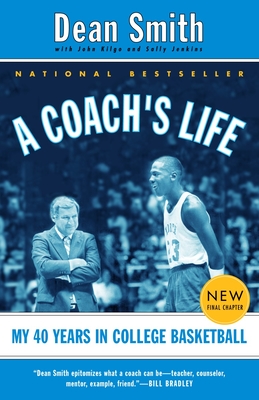 A Coach's Life: My 40 Years in College Basketball (Paperback)


Available to Order - Usually Arrives in Our Store in 4 to 7 Days
For almost forty years, Dean Smith coached the University of North Carolina basketball team with unsurpassed success, having an impact both on the court and in the lives of countless young men. In A Coach’s Life, he looks back on the great games, teams, players, strategies, and rivalries that defined his career and, in a new final chapter, discusses his retirement from the game. The fundamentals of good basketball are the fundamentals of character—passion, discipline, focus, selflessness, and responsibility—and superlative mentor and coach Dean Smith imparts them all with equal authority.
Dean Smith was born in Emporia, Kansas, in 1931. At age thirty he became head coach of the University of North Carolina, and in his more than thirty-six years there, he established a peerless record—879-254, .776—as the winningest coach in college basketball history. Smith has won numerous coaching awards, including eight ACC Coach of the Year titles, and was named coach of the 1976 U.S. Olympic team. He lives in Chapel Hill, North Carolina.

John Kilgo is a writer who has known Dean Smith for three decades. He publishes a UNC sports magazine, Carolina Blue, and was the co-host of Smith's TV show for fourteen years. Kilgo lives in Davidson, North Carolina.

Sally Jenkins is the author of Men Will Be Boys and the co-author of Pat Summitt's first book, Reach for the Summit. A veteran sports reporter whose work has been nominated for the Pulitzer Prize, she has worked for The Washington Post, Sports Illustrated, and Condé Nast's Women's Sports and Fitness.

“Dean Smith is not merely a basketball coach of historic accomplishments. He is also a man of uncommon integrity and decency. His life story will be heartening to the many Americans who have watched him shape two generations of young athletes to reach their full potential as men.”
—Senator John McCain

“Dean Smith is a better teacher of basketball than anyone else.”
—John Wooden, former coach, UCLA